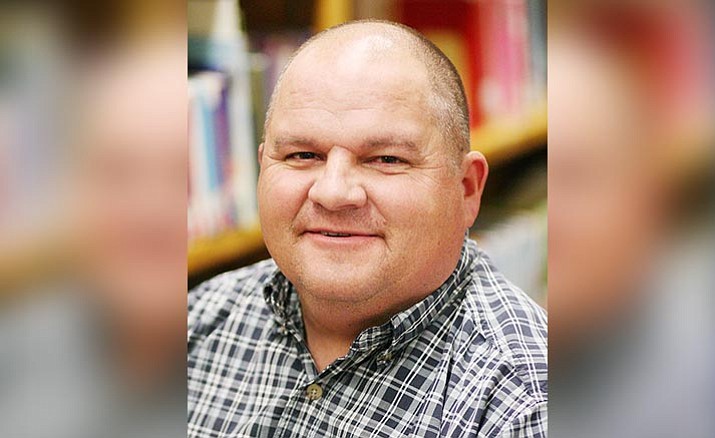 For 2017-2018, the school received a C. Danny Howe, the district’s administrator-in-charge, is “elated” with the increase in grade. But he’s not satisfied. VVN/Bill Helm

A year ago, Camp Verde Middle School earned a D in the Arizona State Board of Education’s annual A-to-F Accountability System.

For 2017-2018, the school received a C. Danny Howe, the district’s administrator-in-charge, is “elated” with the increase in grade.

But he’s not satisfied.

VERDE VALLEY – AzMERIT will go away at the end of the 2018-2019 school year. Whether that is good or bad, the elimination of that brand of standardized testing will greatly affect A-to-F scores moving forward, as AzMERIT accounts for half of the Arizona State Board of Education’s A-to-F Accountability System.

A-to-F is weighted 30 percent on proficiency and 20 percent on growth, each based on AzMERIT scores.

The remaining 50 percent of A-to-F is based on 10 percent for English language proficiency and growth (assessed by the Arizona English Language Learner Assessment), 20 percent for graduation rate, and 20 percent for college and career readiness.

“We’re going to use this as a means of always wanting to improve,” said Howe, who also is the middle school’s principal. “How can we make our schools better for our kids? That’s the takeaway. As long as we make quality citizens and those kids walk across that stage and get their diplomas.

Though folks at Camp Verde’s American Heritage Academy are celebrating a two-step increase from last year’s D to this year’s B, the program’s head official said Wednesday that standardized testing is a “fraction of what creates student success.”

“There are areas of student growth that go unmeasured within each one of our distinct student populations,” said Mark Plitzuweit, president and CEO of Edkey Inc./Sequoia Schools, the parent company of American Heritage Academy’s Camp Verde and Cottonwood campuses.

At this time, the company is “currently evaluating the data used to determine the A-F letter grades for each of our campuses.”

“We are proud of the students and the staff for their hard work and commitment, in all areas, as it pertains to our individual school missions,” Plitzuweit said.

Missed it by ‘that much’

Beaver Creek School may have gone from last year’s C to this year’s D, but the K-8 school’s focus for the 2017-2018 school year was to “improve reading instruction through stronger emphasis on foundational reading skills,” said District Superintendent Karin Ward.

That said, Beaver Creek missed out on a C grade by .07 percent.

And it’s “only one measure of what we do here in Beaver Creek,” Ward said.

“It’s one picture. We measure students’ growth in so many ways,” Ward said. “We never want to make any excuses. We’d rather focus on the interventions we use each day.”

Such as the school district’s Blended Learning program, which allows fifth- and sixth-grade students to work together, as well as seventh- and eighth-graders. This system, Ward said, is to “get our kids to be more engaged, and to stimulate their own personal learning.”

“Lifelong learners,” Ward said. “Not just learning what we tell them to learn.”

As it connects with testing such as AzMERIT, Beaver Creek focuses on “boosting our achievement on foundational reading skills supports our students in their abilities to read word problems and decipher details in math content,” Ward said.

Ward also said that there “generally is a three-year lag between implementation and results with a new curriculum, so the district attributes some of our growth to the successful implementation of that program.”

Beaver Creek School is in “the process of an internal evaluation to see if we should be appealing the grade,” Ward said.

A year ago, the Arizona State Board of Education was met with controversy as it handed down its achievement profile for the state’s public and charter schools.

Better known as an A-to-F grading system, more than 200 schools a year ago saw the evaluative tool – and their grades – as appealable.

Some of the Verde Valley’s schools, such as Beaver Creek School in Rimrock, have not yet decided whether they will appeal their 2017-2018 letter grades. While others, such as Mingus Union and Cottonwood-Oak Creek schools, have already stated that they are in the process of appeal.

Schools have until 5 p.m. Oct. 25 to appeal their letter grade, according to the Arizona State Board of Education website, https://azsbe.az.gov/f-school-letter-grades.

At noon on Nov. 19, the A-F Appeals Committee will review appeals.