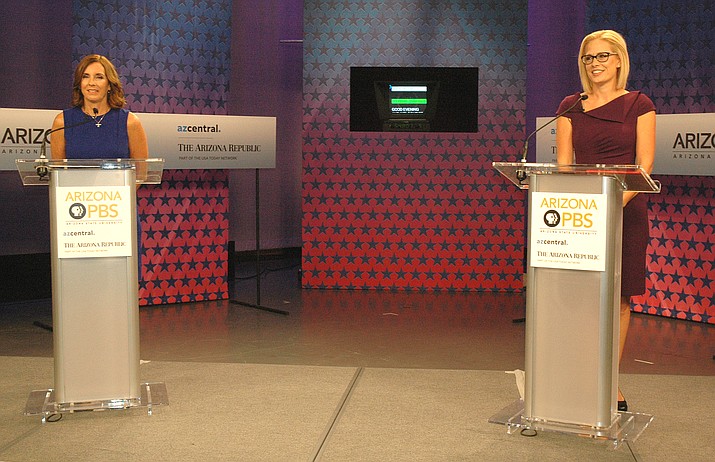 Martha McSally and Kyrsten Sinema face off Monday in their only debate for U.S. Senate (Capitol Media Services photo by Howard Fischer)

Near the end of the hour-long debate on KAET, McSally brought up a radio interview Sinema did in 2003 during her anti-war days. Asked if it was OK to fight for the Taliban, she said "fine, I don't care if you want to go do that."

Much of the campaign against Sinema has been focused on who she was more than a decade ago, including her opposition to war in the Middle East. McSally hopes to convince voters that Sinema, who since being elected to Congress in 2012, is not the moderate that she proclaims.

After the debate, Sinema brushed aside the questions of what she said years ago.

"Martha's chosen to run a campaign that's based on smears and attacks and that's her choice," she said. And what happened in the past, Sinema said, is history.

But Sinema wasn't the only one on the defensive as the pair, in a virtual dead heat to replace retiring U.S. Sen. Flake, each sought to score points with the perhaps 10 percent of Arizonans who say they are undecided.

Sinema accused McSally of being an "apologist" for anything that the GOP -- and Donald Trump in particular -- want. And McSally was defensive about questions about her views on President Trump and her open support of him this year, versus her refusal to endorse him two years ago.

McSally, first elected to represent CD2 in Southern Arizona in 2014, said she was focused on representing her district.

"But he's in office," she said. And that, McSally said, means she needs to work with him, as she said she did to preserve the A-10 attack aircraft that the Obama administration had tried to scrap.

She was a little less straightforward when asked if she was proud of Trump.

"I am proud to be working with him to provide more opportunities and to make sure we keep our country safe," McSally said.

It is that attitude, she said, that has led to him make major strides like trying to remove nuclear weapons from the Korean peninsula and updating old trade policies.

But Sinema said the flip side has been a trade war.

"That is devastating for Arizona's businesses and for our agricultural community," she said.

And the effects, Sinema said, trickle down to everyone else. She cited the increase on tariffs on aluminum, something that will make cans more expensive.

McSally defended her votes to scrap the Affordable Care Act even as she conceded that the law she voted to repeal has made insurance available to some who did not have it before.

"We cannot go back to where we were before," she said. But McSally said the program, known as Obamacare, just does not work as constructed and is financially unaffordable.

McSally said that while she wanted to scrap the Affordable Care Act she supports such a requirementf. The problem, she said, is that "Obamacare was the wrong approach."

Sinema, however, said the alternatives offered by McSally and Republicans would return the country "to the time when people couldn't afford health insurance."

"The solutions Martha has voted for actually make the system worse and hurt Arizonans," Sinema said.

The issue of abortion underlined one of the stark differences between the candidates.

Sinema said that issue should be strictly between a woman and her doctor. McSally defined herself as "pro-life."

But McSally sidestepped the question of whether she wants the U.S. Supreme Court to overturn the historic 1973 Roe v. Wade decision that legalized the right of women to terminate a pregnancy.

"I would support appointing justices that are looking independently at the Constitution and the laws that we make," McSally said.