Mingus football moves up to No. 13 following Bradshaw Mountain win 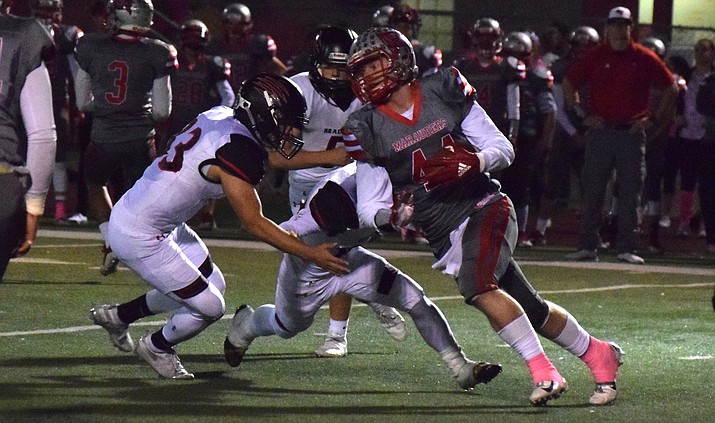 After last week’s win over then No. 4 Bradshaw Mountain Mingus Union football moved into a playoff position.

The rankings of other Mingus Union opponents of note are Chandler Seton Catholic Prep at No. 5, Gilbert Mesquite at No. 16 and Coconino at 17th.

Mesquite and Coconino could end up contesting the last playoff spot. Mingus Union beat the Wildcats 24-21 at home and lost to the Panthers 42-40 on the road. 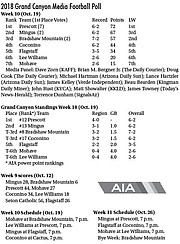 Mesquite has won five games in a row since the loss in Cottonwood and close out the season with No. 40 Tempe Marcos de Niza and No. 2 Scottsdale Saguaro.

Tucson Salpointe Catholic remained No. 1, ahead of the Sabercats by a large margin. If the Lancers make the state championship game it is expected to be at Arizona Stadium at the UA, if no Tucson team makes it then it could be at a high school.

If the playoffs were to start this week then the Marauders would face No. 4 Goodyear Desert Edge in the first round of the playoffs. DE edged Prescott 40-17 in the season opener and lost by just seven at Salpointe.

The eight region champions receive automatic bids to the state tournament and in the current rankings all the region leaders are in the top 16.

Mingus Union looks to stay on pace for a region championship game when they travel to Flagstaff on Friday.

Flagstaff has lost two of their last three games after the fell 56-26 at Seton last week. They beat No. 36 Lee Williams 39-0 and lost 42-7 to Bradshaw Mountain during that span.

This season Flagstaff has remained in the middle of the region, behind the front running Badgers, Marauders, Bears and Panthers but ahead of the cellar dwelling LW and Mohave.

It’s a home game for the Eagles but the only home contest they’ve won this year is the Lee Williams game. Mingus Union is 1-2 on the road, losing the Seton and Coconino games when they weren’t at full strength.

Prescott retained their spot atop the Grand Canyon Media poll

Last week Badgers moved to No. 1 after their win over then top ranked Bradshaw Mountain. However this week Mingus Union narrowed the gap, moving to within five points of the Badgers.

Prescott led the way with seven first place votes, MUHS had two and Bradshaw Mountain had two. BM dropped from second to third and fourth through seventh remained the same.

The 1A playoffs begin this week and Williams enter as a favorite.