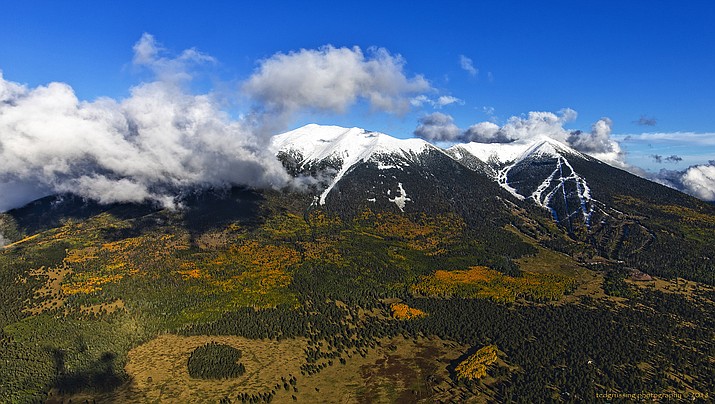 A dreamland of , snow, clouds and blue skies that I had on flights to the SF Peaks last week … I took this shot on the 12th of October and the shots I took on the a flight up there on the 18th showed significantly less color and it looked like most of the leaves had been blown off or just separated and fell off … so this image is about as good as it got, or rather as good as I saw it get this year. I talked with a friend today who was up there shooting and he said it was pretty anemic with just some smaller patches of color. Time for me to start checking out the canyons off of Sycamore Canyon which frequently get some beautiful colors including reds; maybe tomorrow or Tuesday morning.

Can’t emphasize enough how beautiful it was this year … first year ever to get snow on the peaks with the color and it adds so much to the image. I tried getting into the inner basin on the 18th too, but it was totally socked in. In this photo, working right to left we have Agassiz Peak and Snow Bowl and Humphreys Peak just to the left. As you continue to the left you have the NW corner of the peaks and the clouds dropping down to about 8,000’ … in other words, down to the surface. There was no flying on the north side of the peaks. It was absolutely a blast going up there and hanging around getting shots from different altitudes and angles. Mariah serves well as my airborne tripod! Fun! Shot taken at 11,000’, Humphreys Peak is 12,633’

A friend and I are heading down to Watson Lake tomorrow afternoon … expecting to see the first waves of waterfowl that are making the annual migration and with a little luck and skill I’ll get some good shots. I love being on the water and the shooting is just an added bonus.

We’re into a new week, and it will be a good one as that is the plan … have an absolutely beautiful Monday and share a smile with everyone you meet … like why not?

Though changed as are my songs from youth,

A voice within my heart still sings,

Live thou in tenderness and truth,

And love mankind instead of things.