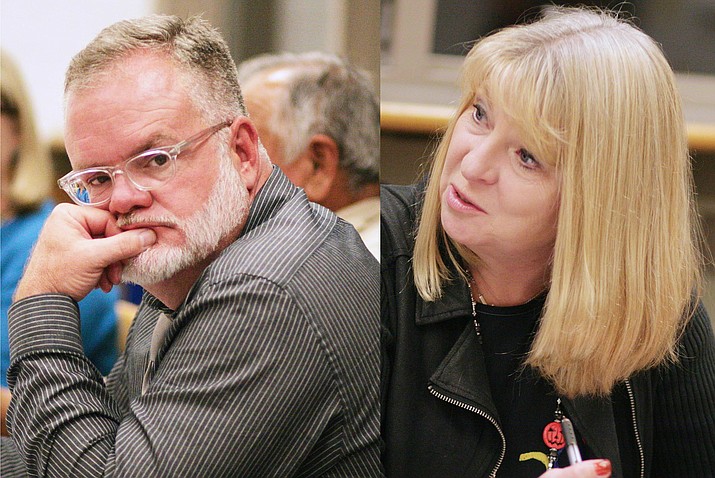 COTTONWOOD – What Mingus Union Principal Genie Gee called a “technology failure” in August is now being called an “internal fire, a leadership failure” by a member of the district’s governing board.

Following close to an hour in executive session, Mingus Union School Board Member Jim Ledbetter motioned that District Superintendent Penny Hargrove be placed on a 10-day paid administrative leave for “serious missteps in handling of the processes” connected to AzMERIT testing problems in April.

Prior to the board’s 5-to-0 vote Thursday, Ledbetter said that “the steps” that Hargrove took were “not a focused approach.”

Sixty percent of the district’s D-grade in the A-to-F score given by the Arizona Department of Education on Oct. 5 is affected by AzMERIT scores. To that, AzMERIT test scores “were not a reflection of student performance, or of Mingus educators,” Ledbetter said.

“We should have known in April,” Ledbetter said. “There are things we could have done that we didn’t do. As a board, we own it.”

Since securing system improvements over the summer, the district has run three tests to anticipate problems and provide solutions before the April 2019 AzMERIT testing, Gee told the board.

Two of the tests, Hargrove said, “crashed the system.” The most recent test “could not” crash the system.

Though Ledbetter said the system is “not fail safe,” Hargrove responded that “we’re trying to make it fail so we can find out what’s wrong, so we can fix it.”

“If we’ve failed two of three times, we have a problem,” Ledbetter said.

The Mingus Union School Board has assigned Hargrove to home for the next 10 business days, and has “admonished” her to not discuss the situation with anyone except for the board’s investigators.

Ledbetter said the investigation will be led by the law firm of Gust Rosenfeld and specifically Susan Segal.

“They are part of the pre-paid legal program through the Arizona Risk Retention Trust. I do not anticipate any direct cost to the district,” said Ledbetter.

“Per board direction and school attorneys, Dr. Penny Hargrove has been placed on administrative leave for a personnel matter pending an investigation being conducted by the Gust Rosenfeld legal team,” Gee said in a memorandum to MUHS staff. “I do not have any additional details and will not be able to answer any questions that you may have. I do understand that this may cause some concern, but please do not speculate or make assumptions. The best thing we can do is maintain business as usual and focus on the job at hand.”

“I do know of one other school district that had this problem. I will sit down with ADE and find out how many others experienced it,” Segal said.