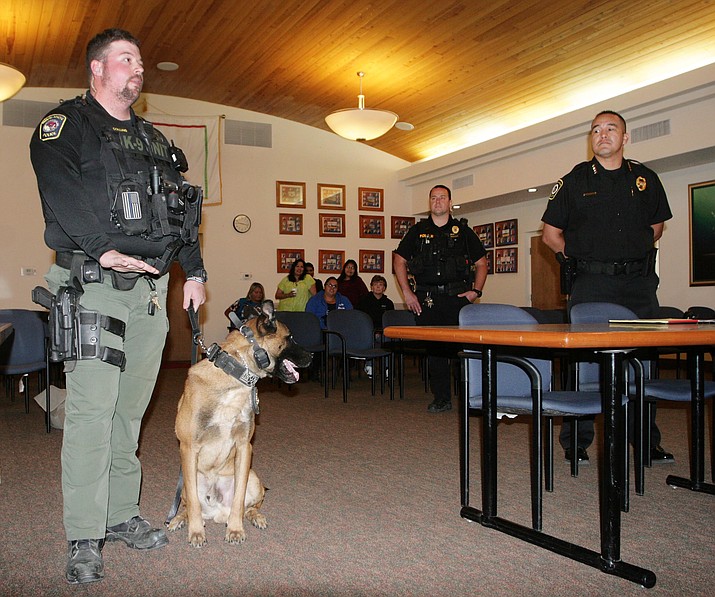 MIDDLE VERDE – At age 12, Joshua Collins decided that he would become a police officer.

Thursday, the Yavapai-Apache Nation’s Tribal Council officially recognized Collins in his role with the department.

“We appreciate all you do for the Nation,” Tribal Council Vice Chairman Larry Jackson told Collins and Loki.

Collins was named K9 officer in October 2017. Three years on the job with the Yavapai-Apache Police Department, Collins has worked with Loki since May. The K9 was acquired earlier this year from Waddell Kennels in Phoenix.

“I’ve always wanted to be a K9 handler,” Collins said Thursday after meeting with Tribal Council. “It’s why I got into law enforcement.”

“He has a sixth sense,” Huibregtse said. “When he tested to be a K9 officer, Josh [was] the best.”

But Collins is “still learning something new each day.”

Which is why he spends 10 hours each Wednesday in training with the Verde Valley K9 Unit with Jeff Bowers of the Camp Verde Marshal’s Office and Cottonwood Police’s Corey Schilling.

Because both Loki and Collins are training.

Though Loki is a police officer, he’s first and foremost a dog. And dogs like to play.

On days that the pair works, once Collins gets himself ready, he fits Loki into his uniform, which consists of a flat collar and an electronic collar “so we can communicate.”

Loki, who originally came from France, takes all of his commands in French.

“It’s all he knows,” Collins said.

Once in uniform, Loki takes one last trip to the bathroom before the pair goes to work.

If it weren’t for a collection of partnerships, the Yavapai-Apache Police Department may not have its newest K9 officer.

Thanks to Tribal Housing’s contribution of the materials used to build a kennel, money contributed by Cliff Castle Casino Hotel and the Nation’s Tribal Council, and food donated regularly by Olsen’s Grain, Loki is the third K9 officer in the Nation’s history.

“We keep the reservation safer,” Collins said. “This really means a lot to me.”