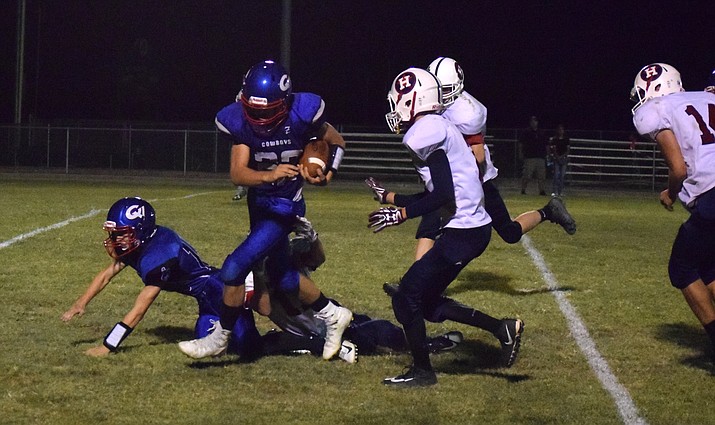 Camp Verde High School football cruised to victory in their home opener to notch the first win of the Rick Walsworth’s era.

Camp Verde ran for 397 yards on 62 carries and nearly had three 100-plus yard rushers.

“Oh it’s great, it’s great,” Walsworth said when asked about getting his first win as the Cowboys’ head coach. “I’m just happy for the kids. I know it was really important for the kids to get the win at home in the first game. I’m just really proud of them and happy with how hard they worked and I’m really glad they got to do that in front of their home fans (Friday) night.”

The Cowboys jumped out to an 8-0 lead in the first quarter and then added 16 more points in third to get the win.

In their season opener at Scottsdale Prep, the Cowboys dominated the third quarter as well.

“The kids played really hard, we did a really good just job controlling the ball, we made a couple mistakes with turnovers early in the game that we just need to correct and we’re going to have to be able to throw the ball a little bit but everything that happened is stuff we can fix and we did a really good of coming out in the second half ready to go and took the ball and went right down and scored just like last week,” Walsworth said.

Senior quarterback/defensive back Steven Petty scored the first touchdown of the game, running it from four years out. He ran for 98 yards on the night on 13 carries and scored a pair of two point conversions.

“We did really good, we struggled a little bit in the first quarter getting it together but we pulled through in the end I’m proud of my guys,” Petty said.

Although they moved the ball up the field, the Cowboys couldn’t score again until the third quarter. They ran out of time on the final drive of the second quarter, with the time expiring when they were in the shadow of the goal line.

“It was a little frustrating but I knew I could count on my team,” Petty said.

In the third quarter Petty ran for a three-yard touchdown and freshman running back/defensive back Matt Loza rushed for a 13-yard score to put the game out of reach.

Petty and Kelley said they pushed harder in the third.

“With what we do offensively, it wears on the defense, so in the second half they’re a lot more tired than they were starting the game and so it’s just an advantage for us to get the ball first in the second half,” Walsworth said. “The kids just came out and executed, the offensive line did a great job blocking and the backs ran hard and took care of the ball again (Friday) night.”

Even though they put in their freshmen reserves, the Cowboys picked up their first shut out since Sept. 8 2017 when they beat Arizona College Prep 22-0. Last year was the Knights’ first season.

“Shut outs are tough, it’s tough to have something not blown once during the game where somebody ends up scoring and they had three or four guys on the field that could make plays offensively,” Walsworth said.

The Heroes threatened late in the game but the Cowboys’ defense of nearly all freshmen by that point kept the clean sheet with an interception.

“They did pretty good actually, the other team didn’t score on them and they still had their varsity team out there,” Kelley said about the CV freshmen.

Camp Verde’s next game is at Chino Valley (1-1) on Friday with the Bronze Boot on the line. The Cowboys next home game is on Sept. 14 against Valley Lutheran.

Kelley said the win gives the Cowboys a lot of momentum.

“People can start talking to other people and telling them we are winning so they can come watch more,” Kelley said.