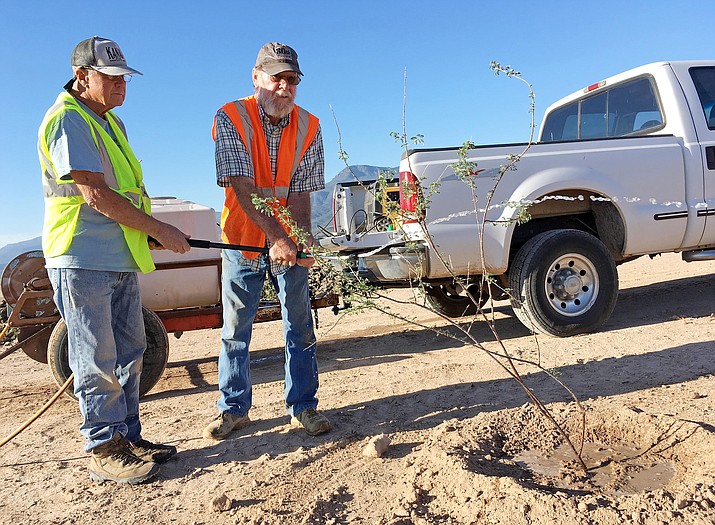 Jimmy Whatley and Ray Floyd water one of several dozen different trees, shrubs and other vegetation they planted this week at the Camp Verde Sports Complex. Whatley and Floyd are part of the geriatric volunteer group known as the Old Guys. VVN/Bill Helm

CAMP VERDE – The Old Guys found a way to beat the heat – and another way to benefit the Town of Camp Verde.

Starting at 6 a.m. Wednesday and continuing early Thursday morning, the town’s geriatric do-gooders planted more than a dozen different species of trees, shrubs, cacti, grass and flowers in the buffer between the Camp Verde Sports Complex and the homes of its McCracken area residents.

Spending about five hours each of the two days, the Old Guys started a project they expect to “continue for the next several weeks,” says Nancy Floyd, whose husband Ray is one of the group’s founding members.

In this case, it’s both who you know and what you know, as the Town of Camp Verde’s Public Works Director, Ron Long, asked if the Old Guys could help out, Nancy Floyd said.

Camp Verde Town Manager Russ Martin said that the Old Guys planting trees for the Town “really helps stretch the budget when we can find ways to save money.”

“Especially with vegetation, that means growth will occur sooner, making it an even more pleasant place for all who will be using the facilities,” Martin said. “It’s always a great help to have a committed group who is always there to assist in every way.”

The vegetation, which was paid for by the Town of Camp Verde, was provided by Mountain State Nursery in Glendale.