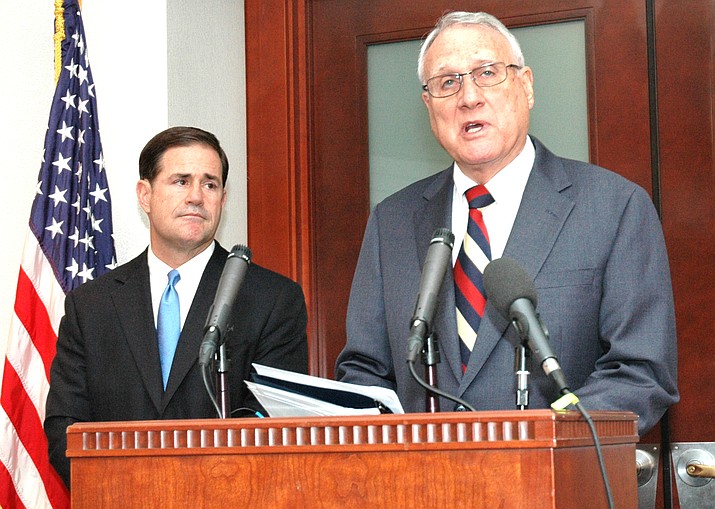 Once and future Sen. Jon Kyl answers questions Tuesday about being named by Gov. Doug Ducey to replace John McCain, at least through the end of this congressional session. (Capitol Media Services photo by Howard Fischer)

Ducey said the move, just two days after McCain was buried, was specifically designed to be quick. In fact, the governor said that Kyl was headed to the airport right after the press conference in hopes of getting sworn in as soon as possible.

How long Kyl will remain is unclear.

By law, he can serve through the 2020 election. And Ducey said he hopes that is the case.

But Kyl, 76, was unwilling to make that commitment, at least at this time, vowing only to remain in Washington through the end of this congressional session which can run through early January.

If Kyl quits, Ducey then would get a chance to name yet another senator, though the question of whether the governor wins another term in November could come in to play. In any event, Ducey took himself off the short list of potential future senators.

The announcement comes less than a week after Rick Davis, McCain’s former campaign manager, said he thought that his former boss would have liked to see his seat filled by a Hispanic woman. Instead he got an older white male who previously served in Congress for 26 years.

“I wanted to pick the best possible person regardless of politics,’’ Ducey said.

“There is big work to be done in the United States Senate,’’ the governor continued. “No one in the state of Arizona has the stature of Jon Kyl.’’