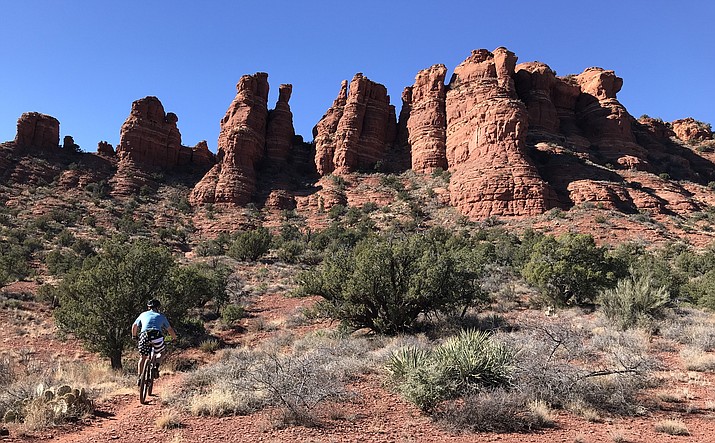 Photo by Mike Coyne on a social trail - Western Civ - of the Western Gateway Area that will be brought into the Forest System as part of the project.

Specifically this Project will construct non-motorized multi-use trail, adopt user-created trails, reroute system trails and perform restoration actions in an area located just west of the Sedona city limits and north of State Route 89A, known as the Western Gateway and accessible from an area previously known as the Cultural Park.

With support from the USFS and City of Sedona, the Project will construct over 27 miles of non-motorized trail and is scheduled to take up to three years, including trailhead improvements.

“When we put the call out for donations, mountain bikers from 18 States and as far away as Alberta, Canada responded,” said VVCC President Marty Glinsky, “And our fundraising success boosted the amount of work that will get done with this MAP Grant.”

The Project will also hire and train youth crews. “Two ACE youth crews will begin construction in January 2019. The RRRD will be directing these two ACE crews that are staffed by 18-25 year olds who are considering land management as a career path,” stated Forrest Saville, RRRD OHV and Trails Coordinator. “Jordan Rolfe, Director of ACE Southwest added “We are thrilled to be part of this Project.”

According to the SRRTF’s President Kevin Adams, they are now working on raising funds for the 2019-2020 Project season.

Donations can be made online at redrocktrailfund.org or through the mail to P.O. Box 4475 Sedona, AZ 86340. A renovated trailhead is planned, but currently unfunded.

Information (and a map) about the Western Gateway Trail Project can also be found at the SRRTF website, redrocktrailfund.org.

The Sedona Red Rock Trail Fund is a 501(c)3 non-profit organization of local hikers, cyclists, runners and equestrians who work closely with the Red Rock Ranger District and other organizations to raise funds to help pay for trail maintenance and enhancements on National Forest lands near Sedona and the Village.

The Verde Valley Cyclists Coalition is a 501(c)3 non-profit that works to improve the bicycling environment and quality of life in the Verde Valley.

REI Co-op is a specialty outdoor retailer, headquartered near Seattle.

The Red Rock Ranger District of the Coconino National Forest includes 560,000 acres of public lands including the area around Sedona, Village of Oak Creek, and Verde Valley communities on the east side of the Verde River.

The District contains over 400 miles of non-motorized trails which receive more than 1.7 million visitors per year.