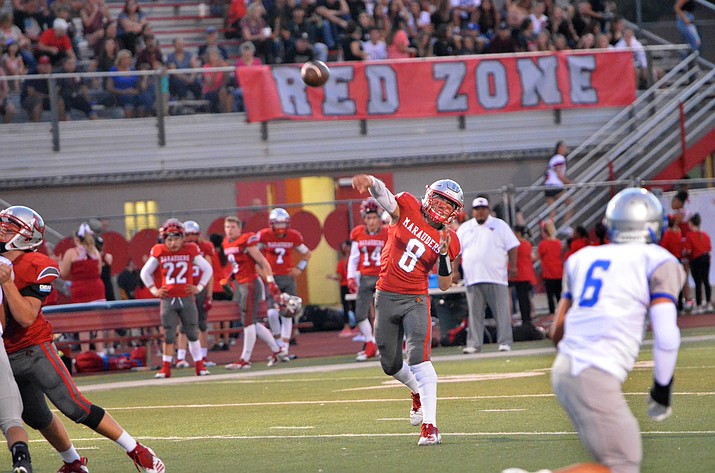 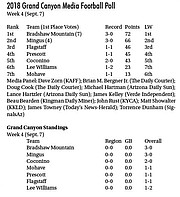 Bradshaw Mountain’s overall lead in the Grand Canyon Media Football Poll over Mingus Union widened but the Marauders have pulled to within three first place votes.

For the fourth straight week the Bears and Marauders were atop the rankings. This time BM leads Mingus Union by six points, up from four last week but by only 7-4 in first place votes.

Bradshaw Mountain and Mingus Union are both off to their first 3-0 start in eight years. The last time the Marauders started 3-0 they went 9-3 and made it to the state quarterfinals.

Going into this season, MUHS had lost seven games in a row to teams from outside the Grand Canyon Region.

Prescott is off to a 1-1 start after bearing Moon Valley 43-0. They were without their head coach Michael Gilpin who would go on to resign on Sept. 5.

Third place Flagstaff rebounded from a four-point loss to Glendale in Week 2 to beat Dysart 28-7.

The bottom five teams remained the same except for Mohave (1-1), who dropped to seventh place after they lost 35-21 to Lake Havasu.

Next week sees the start of region play with MUHS traveling to Coconino.

The AIA’s power point rankings will debut in Week 7.