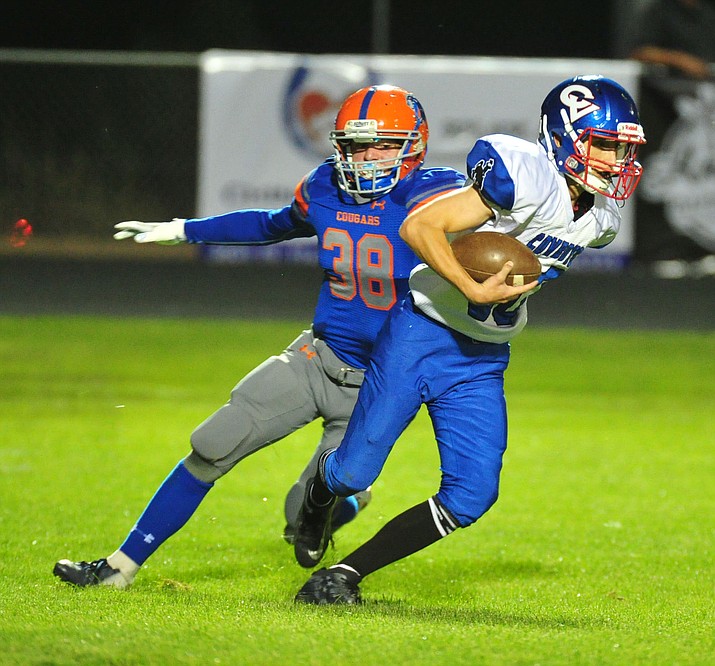 CHINO VALLEY — The Camp Verde High Cowboys were unable to take the Bronze Boot for the third year in a row, losing their Friday night game against rival Chino Valley Cougars 42-0.

The Cowboys won the Bronze Boot in 2015, the first time it was awarded, before Chino Valley took it back in 2016. The Cougars have had it ever since.

The Cougars had three touchdowns in the first quarter with senior running back Michael Paulus scoring twice, once in the first few minutes and again with 6:34 left in the quarter while senior Elijah Scordato ran more than 50 yards to make the third with 2:42 left to go.

The fourth quarter was scoreless.

Cougars Head Coach Wade Krug said it was a great game as well as a great team effort from everyone involved from the junior varsity all the way up to the varsity.

“Hats off to the varsity,” Krug said. “They played a great game offensively, defensively and special teams wise.”

Additionally, Paulus said he feels good about the team’s performance, stating he wouldn’t have had the game he did without them.

“When I think about this victory, I think of my brotherhood,” Paulus said. “If it wasn’t for them, we wouldn’t have a team, we wouldn’t be winning like we have in these last two weeks.”

Cowboys Head Coach Rick Walsworth said he knew the Cougars were going to be a tough team to play against.

“We knew Chino was going to be maybe, the best team we play all season,” Walsworth said. “Our guys played hard and they didn’t quit.”

Krug said he hopes to have another great game next week.

UP NEXT Camp Verde Cowboys are at home against the Valley Lutheran Flames at 7 p.m. Friday, Sept. 14. The Flames are 1-2

The Cougars are at home again against Arizona College Prep Knights at 7 p.m. Sept. 14. The Knights are 0-3.