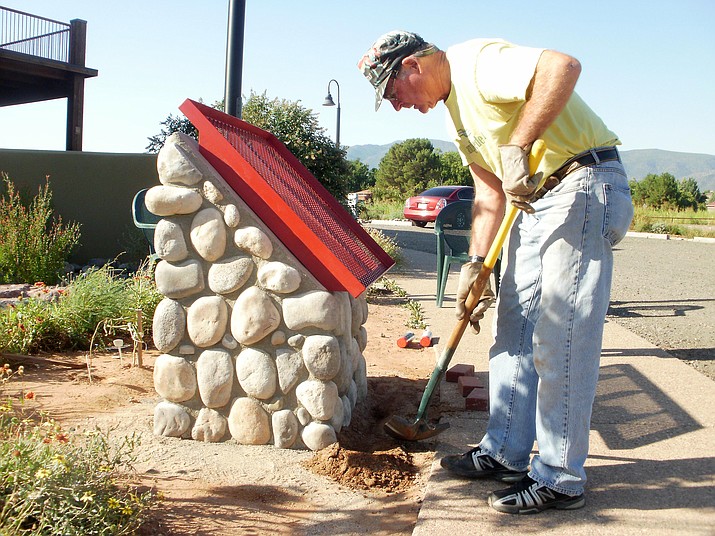 CAMP VERDE – The Camp Verde Community Library is in the brick-selling business.

Donor bricks, that is.

According to Library Director Kathy Hellman, the idea for the donor bricks started with the Citizens Committee for the Camp Verde Library – CCCVL – back when the library was looking for funding to both build and furnish the 17,000-square-foot two-story building.

“Throughout the building process, the team considered where to place the bricks and how to best display them,” Hellman said.

Thanks to the Old Guys, the Camp Verde library now has a display for the bricks. A “monument,” according to Nancy Floyd, whose husband Ray Floyd is one of the Old Guys.

“A lot of work,” Nancy Floyd said of the several weeks spent creating and installing the display. “But great results. A truly collaborative effort.”

According to Nancy Floyd, Bruce George, Gary Kenfield, Jimmy Whatley, and Ray Floyd “worked for several weeks going from the paper design to the completed job.”

Hellman said that it in the “nearly two years” since the new library opened on Nov. 5, 2016, “we have had trouble finding the right way to display [and] install the bricks that preserves and honors the donors.”

“With the help of the Old Guys, we are able to fulfill our promise to the donors and display both their names and the quotes they chose,” Hellman said. The Old Guys took a complicated task and made it look both simple and fantastic.”

Hellman said that blank bricks are still available for anyone who wishes to have his or her name added to the monument.

According to longtime CCCVL member Linda Harkness, the idea for the donor bricks “started from one of the last fundraisers CCCVL had for library construction.”

“There are quotes, memorials, and dedication bricks from several community individuals,” Harkness said.

For more information, or to purchase donor bricks, call the Camp Verde Community Library at 928-554-8380.