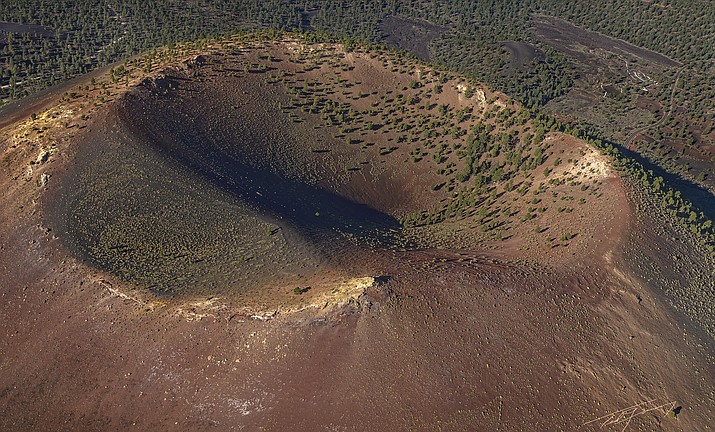 What the inside of Sunset Crater looks like? Wonder no longer, as this shot I took last September, gives you a clear view of the entire caldera of Sunset Crater … one of my favorite place to go; in the air for beautiful photos of the crater and surrounding volcanic fields and other volcanic cones and on the ground for the spectacular wood and a sense of being in an area less than ten minutes ago in geologic time, saw the earth’s crust ripped and rendered and molten lava exploding out of the earth. For us it was about 940 years ago … we do have a skewed sense of time … the Sinagua and Hopi, I believe, occupied the land at that time. The mini ice age would not begin for about 300 years when Sunset Crater erupted and earth experienced a major drop in earths temperatures effecting agricultural output throughout the world …the most drastic period of it was the first hundred years or so and it continued until about 1850. Reasonable scientific belief that we will experience another cooling down soon as the sun slips into another solar minimum. Last year there were 15 days in a row with no sunspot activity and 104 days total for the year. In 2018 the longest run is 3 days in a row, but already 141 days with no sunspot activity. If you are interested in this kind of thing check out Space Weather at: http://www.spaceweather.com/ my kinda stuff.

So, what are we looking at? … The perspective is roughly from the NNE side looking to the SSW. The rim of the cone sank substantially on the ENE side and when viewed from the W side looking E it appears to be heart shaped … really quite spectacular and I’ll send that out another night … sure I already have, but it has been a while. In the upper right quadrant you can see the parking lot for the trails that go through the lava fields and the base of the volcanic cone. The road on the upper left (south side) joins with the road that goes on the north side a few miles to the east of this position. To learn a lot more about the history of the crater check the official site out: https://www.nps.gov/sucr/index.htm

So we’re into a new week and lots of fun things on the way … if you are in the area on Wednesday the 12th , plan on coming over to Keep Sedona Beautiful, where beginning at 5:30 I will be giving a presentation and having a conversation about photos of Sedona and Northern Arizona … Meandering Around Sedona and Northern Arizona as seen through the eyes, lens and mind of Ted Grussing. There will be about 150 photos and except for the first 10 or so, were all shot after my last presentation to KSB in 2016. Rather than categorize the photos by topic they are in order by date created and there are some series among the photos. The address is 360 Brewer Road and the website is: https://keepsedonabeautiful.org/

They also have a brand new bright screen that is beautiful … hope to see you there and there is no charge.

Have an absolutely beautiful day … keep breathing and smiling!

Go placidly amid the noise and haste, and remember what peace there may be in silence.

As far as possible, without surrender, be on good terms with all persons. Speak your truth

quietly and clearly, and listen to others, even the dull and ignorant; they too have their story.

Avoid loud and aggressive persons, they are vexatious to the spirit.