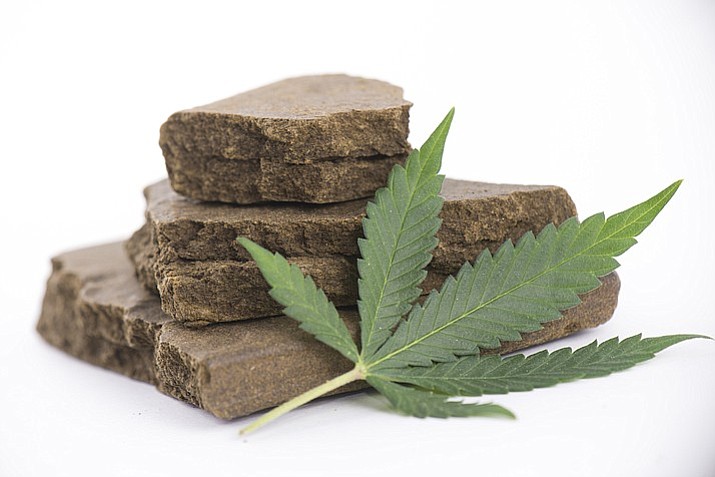 PHOENIX -- Attorneys for a Yavapai County resident are asking the Arizona Supreme Court to overturn a lower court decision which makes criminals out of medical marijuana patients who choose to use edibles and liquids rather than smoking the plant's dried flowers and leaves.

In new filings, the lawyers contend the state Court of Appeals got it wrong earlier this year when it concluded in a 2-1 ruling that a 2010 voter-approved law that legalized the medical use of marijuana does not cover products made from hashish and other extracts of the plant. The majority concluded that hashish, essentially the resin of the cannabis plant and the products made from the resin are legally not the same as the plant itself and its possession remains a crime, even for medical marijuana users..

What the high court decides will most immediately affect more than the conviction of Rodney Jones, a registered medical marijuana patient, after he was found in possession of a jar containing 0.05 ounces of hashish. He was sentenced to 2 1/2 years on the drug possession charge and another one year, to be served concurrently, on a charge of possessing drug paraphernalia, meaning the jar.

Jones, given credit for a year he spent behind bars while awaiting trial, has since been released but is hoping to have his conviction overturned.

But the larger question is whether patients will still be able to obtain alternate forms of marijuana that the state Department of Health Services has for years allowed allows to be sold through state-regulated dispensaries. These range from candy bars and gummy bears to oils that can be administered to children who have been recommended medical marijuana by a doctor.

"A lot of people are frightened by what it means to them in terms of their ability to access the medications they need,'' said Robert Mandel, one of Jones' lawyers.

"There are many people who literally cannot be smoking joints, or whatever it is they do nowadays, and cannot be eating the raw plant material, but who benefit from preparations and mixtures,'' he said. "I would certainly as a human being very disappointed to learn that they were unable to access the medications they need.''

The 2010 Arizona Medical Marijuana Act allows those with a doctor's recommendation to obtain up to 2 1/2 ounces of marijuana every two weeks from a state-regulated dispensary. At last count there were more than 174,000 people who qualify.

Mandel pointed out that state health officials from the beginning have concluded that means not just plants but products made from the plants -- and, more specifically, from the psychoactive resin. In fact, Mandel said, Jones obtained his drugs from a dispensary in Maricopa County.

In a ruling last year, a divided appellate court concluded that the 2010 law legalized only possession of the plant. More to the point, the majority decided that hashish is legally not the same as the plant itself, even though it comes from the plant.

Mandel said that ignores common sense -- and the whole reason for the medical marijuana law in the first place.

"I'm not a botanist,'' he said. "But the fact of the matter is that what is medicinal in the plant is the resin.''

He said when people smoke marijuana "they are effectively extracting resin manually.''

"The only difference here is that that extraction process is happening separately in the manufacture of all of these mixtures and preparations,'' Mandel said.

Put another way, he said, the medicine is not "the green leafy stuff'' that the Court of Appeals has said is the only thing that medical marijuana patients can possess.

"It's the stuff on the green leafy stuff,'' Mandel said, meaning the resins that actually come to the surface of medical marijuana plants and make the leaves sticky in the first place. He said making a distinction between the resin and the plant is like saying that the juice inside an orange is not part of a tree.

Mandel also has some more legalistic arguments for the high court.

He acknowledged that the state criminal code does, in fact, provide a different definition for marijuana than for cannabis and the extracts of the plant. But Mandel pointed out that the 2010 voter-approved law specifically says that medical marijuana includes "all parts of any plant,'' not just the leaves or flowers.

And Mandel pointed out that, under the Arizona Constitution, when voters approve their own laws, as they did in this case, they are presumed to be acting as the "legislature.''

"When language is clear, the legislature is presumed to have meant what it said,'' he said.

Finally, Mandel noted that the health department, which is an arm of state government, not only permits the manufacture, preparation and sale of edibles and other forms of the drug but actually has adopted rules about how they should be handled.

"So it effectively has been the law of the state, from the administrative perspective, that they were going to read the text (of the 2010 law) as it is written,'' he said.

No date has been set for the justices to review the lower court ruling.