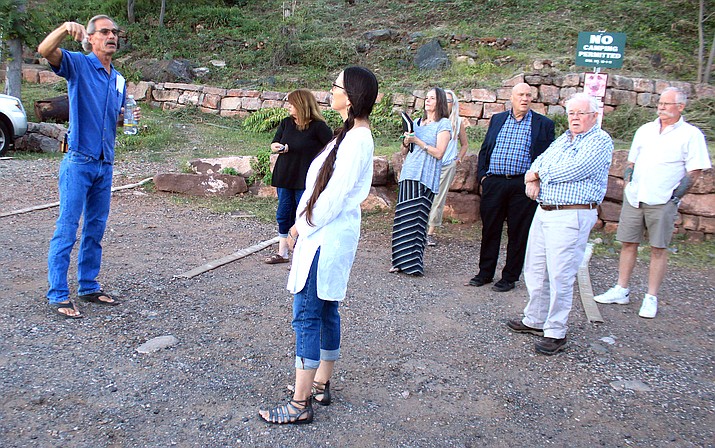 JEROME – The question of paid parking in Jerome is still up in the air as of Tuesday’s town council meeting.

A group of residents and town council members will continue to research the pros and cons of parking kiosks on Hull Avenue.

Council member Alex Barber said residents in Jerome who pay for utilities should not have to pay for parking.

During a call to the public, resident and Council Member-elect Sage Harvey said that while she does not like the idea of parking kiosks in Jerome, she understands the need.

“If we could just make them as small and convenient as possible,” she said.

Harvey also agreed with Barber that Jerome residents should not have to pay.

Jack Dillenberg, who was also recently elected to town council, supported the concept of parking kiosks.

“I think this is a good idea and something visitors should have to pay for,” he said. “No business would be hurt by this and kiosks won’t take way from who we are.”

But Susan Small, a resident and small-business owner in Jerome, said she felt having paid parking on Hull Avenue is discriminatory to the businesses in that area.

Eric Jurisin, owner of Haunted Hamburger and Grapes in Jerome, said that while he was not against the concept, “infrastructure should pay for itself” and metering water usage should come first.

He added that most paid-parking systems he’s seen aren’t efficient.

“I don’t see a lot of good systems out there,” Jurisn said.

Council Member Hunter Bachrach said he understood where residents were coming from but the town needs to generate revenue for infrastructure needs.

“If this doesn’t happen, I don’t know where this money is coming from,” he said.

Town Council conducted its first reading of Ordinance No. 441, which amends the Town Code regarding garbage collection. The ordinance provides a maximum of three 40-pound cans. It also prohibits disposal of animal carcasses.

“Residents needs to understand there are humans picking up the garbage,” said Council Member Jay Kinsella.

Jack Dillenberg, Sage Harvey and Mandy Worth were also elected during the primary.

Initially showing a defeat on election night, Jerome voters ended up favoring staggered terms with 89 votes for and 82 against it.

Jerome Town Council will have its next meeting on Tuesday, Oct. 9, at 7 p.m., at the Jerome Civic Center at 600 Clark St., Jerome. Agendas and minutes are posted on the town’s website at www.jerome.az.gov.