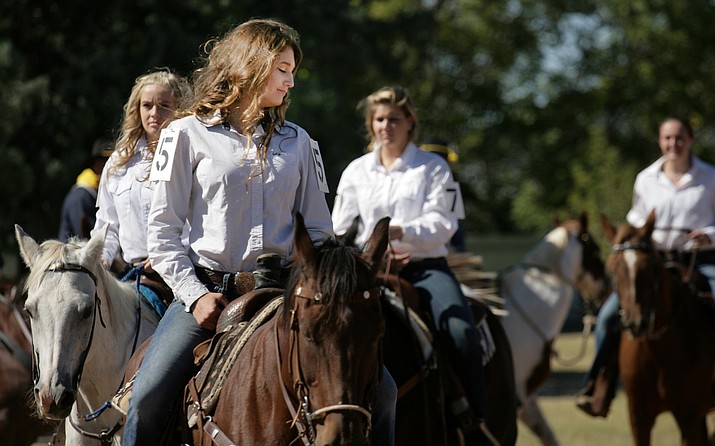 CAMP VERDE – Since 1960, the Colonel’s Daughter Competition has been part of the fabric that is Camp Verde, a beauty contest of sorts.

A panel of out-of-town judges will review the competition and select the 2018 Colonel’s Daughter based on her horsemanship, poise and personality.

According to Jim Meredith, assistant to the colonel, there are five contestants in this year’s competition.

According to Colonel’s Daughter contest rules, contestants must be between the ages of 13 and 18, or still attending a full-time high school.

But it is not or has not been a requirement that contestants still be in school, Meredith said.

For the horsemanship portion of the contest, the contestants are given a riding pattern. A panel of judges will assess horsemanship on each contestant’s ability to sit her horse and her ability to give what is considered a well-balanced, graceful and effortless appearance with her horse under control at all times.

For the poise and personality portion of the contest, the contestants are required to be in attire that depicts the 1800s. Judges ask questions connected to horsemanship, the history of Fort Verde, and current events.

The winner will receive gifts from the town’s merchants, including a winning buckle and spurs. All participants will receive a gift furnished by town merchants. The winner and all other contestants, known as the Colonel’s Daughter’s Court, will ride in the Fort Verde Days Parade on Saturday, Oct. 13, and escorted by the Camp Verde Cavalry.

Contestants must be between the ages of 3 and 6 and dressed in western wear as they parade themselves across the front porch of the Fort’s Commanding Officer’s Quarters.

All in attendance will judge their favorite britches and petticoat. Winners will receive a free carnival ticket for Fort Verde Days and will be part of the Fort Verde Days parade, Oct. 13.