Plane crashes into Cottonwood residence
Cause of crash still unknown 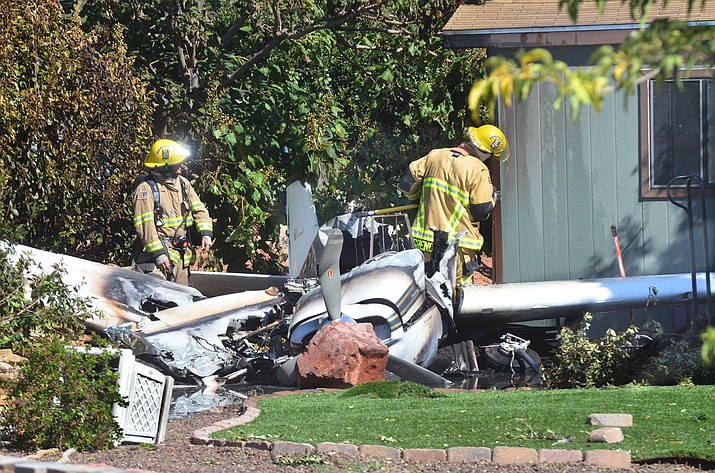 Authorities responded to a fire this morning at the 900 block of Tierra Verde Circle after an aircraft crashed into a residence, according to Cottonwood Police Sgt. Monica Kuhlt. VVN/Vyto Starinskas

Eyewitness to plane crash in Cottonwood... - Verde Independent by verdenews

COTTONWOOD -- Authorities responded to a fire this morning at the 900 block of Tierra Verde Circle after an aircraft crashed into a residence, according to Cottonwood Police Sgt. Monica Kuhlt.

Kuhlt stated in a news release that the single-engine Bonanza Beechcraft was on fire when authorities arrived.

"The only occupant, a 70-year-old local male, self-extricated but suffered serious injury," she stated in the news release. "The patient was flown to Maricopa Burn Center for advanced medical care."

A neighbor, Mike Zemke, said he saw the plane clip the house prior to the crash.

"I thought to myself, it's way too close to for the runway and as the word 'runway' came out of my mouth, it hit the top of the garage there and it landed in the backyard and caught fire," he said.

The fire was extinguished but the residence has minor structural damage, according to Kuhlt. The plane was destroyed.

Zemke said the pilot seemed to be doing "OK."

"He's alive and I was asking him questions and other than obviously being burned up pretty good, he seems to be doing OK," he said.

The Federal Aviation Administration and National Transportation Safety Board will also respond to the scene, Kuhlt said.

The cause of the crash is still unknown, but the pilot said at the scene that the engine stopped, according to Kuhlt.