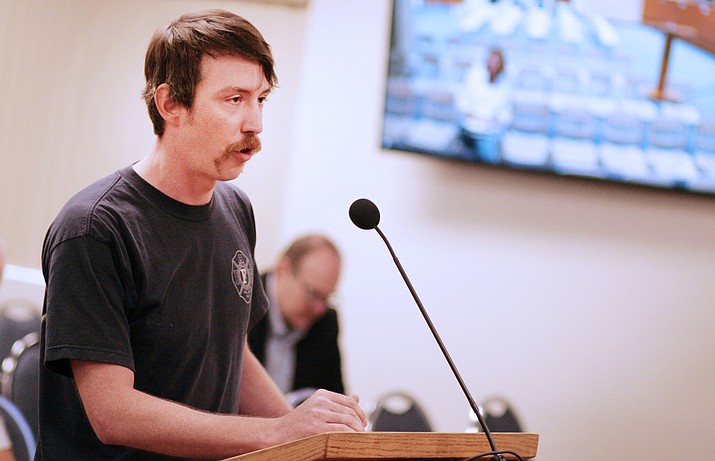 Phoenix firefighter and former Camp Verde resident Jonathan Hall tells the Yavapai County Board of Supervisors that he supports the proposed ordinance to ban texting while driving. VVN/Bill Helm

Jonathan Hall traveled about 100 miles Wednesday from his home in Peoria to tell the Yavapai County Board of Supervisors that he supports a proposed ordinance that would make it illegal to text while driving.

Hall, a 2003 graduate of Camp Verde High School, made the trip with his wife and son. His father would likely have attended, if only he were alive.

Hall spoke on behalf of his father, Tom, who died on April 2, 2016 in a car versus motorcycle collision on SR 69 in Prescott Valley.

The driver’s statement, according to the police report, was that she “reached for her cell phone with her left hand and that she took her eyes off the road.”

According to Hall, a firefighter with Phoenix Fire, the ambulance dash cam of a Lifeline ambulance driving down the same stretch of road captured the crash.

“Within that six seconds of recorded footage,” [the driver] did not see Tom until he impacted her windshield,” Jonathan Hall writes on his website, TomsLawAZ.com. “By then, it was too late. Her airbags deployed and she was able to bring her car to a stop on the shoulder, many yards down the road from where Tom’s body tumbled to a stop on the asphalt. It was then that she got out and saw his motorcycle laying in front of her car in the road.”

Fighting tears, Hall told the Supervisors Wednesday that he “got to watch [several seconds] of the end of my dad’s life.”

“I have no idea what really happened in the car that day,” he said. “I just know what she told that translator, that she took her eyes off the road to reach for her phone, and that choice cost my dad his life.”

From Prescott, Patricia Wyatt David of Bike Prescott also attended Wednesday’s meeting of the Yavapai County Board of Supervisors.

David, who is the organization’s vice president of public relations, said that according to DMV.org, nine people are killed every day because of a distracted driver.

“I know that my dad was one of eight people in this nation to be killed that day by a distracted driver,” Hall said. “I know that a law regulating this public safety epidemic may have discouraged the driver from making that decision that day.”

David told the Supervisors Wednesday that Bike Prescott “strongly supports the adoption of this Ordinance.”

“In the past month alone, four cyclists have been struck by motorists in Prescott. One was a 9-year old child,” she said. “Fortunately, all are recovering but some of the injuries were severe, requiring surgery.”

Despite what Hall called “overwhelming evidence proving that cell phones are a major distraction when engaged while driving, we are sitting here pretending that we can multitask, that we are better drivers than those people that get in the accidents.”

“People actually believe that this cannot happen to them,” he said.

When someone dies, is the living who remain to pick up the pieces. For the Hall family, not only did Jonathan lose his hero, but Hall’s son lost his best friend. And Hall’s mother lost the love of her life.

“My dad was so in love with my mom it was crazy,” Hall said. “He used to tell me all the time how lucky he was to ‘have a gal like her’ put up with a guy like him, and you could see it in his actions how much he cared for her.”

Aiden, who says he is 7 and three-quarters of age, witnessed his grandmother “completely implode,” Hall said.

“Then he learned that Papa Tom was not going to be there like he thought. Not that day. Not ever again,” Hall said. “You see, my dad was Aiden’s best friend. And he could not comprehend a world without him.”

Five at the time of his grandfather’s death, Aiden has battled behavioral issues, Hall said.

“It was a struggle that he had to overcome, something he has done better with as he has gotten older,” Hall said.

It’s been a fight for Hall as well. Tom Hall was a firefighter, 30 years with Phoenix Fire. And Hall wanted “to follow in my father’s footsteps.”

‘Help us protect ourselves’

Though Tom Hall worked in Phoenix, Camp Verde was the family’s home for 25 years.

“My dad loved Yavapai County,” Hall said. “He built the two-story yellow house on Quarterhorse Lane and Shill Road. He loved everything about Prescott and Jerome, and that he could take my mom to the live music downtown in either town and cut a rug. He loved the snow, and making snowmen with my son.”

“He loved that it wasn’t ‘traffic 24 hours a day, even on Sundays’ like he claimed it is in Phoenix. My dad had built the perfect life for him and my mom - and he loved it.”

Perhaps Prescott resident David Harris also spoke for Tom Hall on Wednesday when he told the Supervisors that it’s “not just the laws that need to change.”

“There needs to be public awareness,” he said. “It’s time to make people aware in any way possible.”

Supervisors acknowledged that they had been working on the ordinance for about four years.

“This has been a long, hard fight,” Supervisor Craig Brown said.

For Supervisor Jack R. Smith, the ordinance is “not a partisan issue.”

“It has to do with keeping people alive,” he said. “We have the legal authority, and a moral responsibility to do something.”

For Supervisor Randy Garrison, it was a matter of “our duty.”

“To help us protect ourselves,” Garrison said. “I’m fully in support of this movement.”

The Yavapai County Board of Supervisors will hold the final public hearing and adoption of Ordinance 2018-01 on Oct. 3 at their first meeting of the month.

Though Arizona is one of three states to not have a state-wide ban on texting while driving, Gov. Doug Ducey signed a bill earlier this year that prohibits teens from using any wireless device while holding a learner’s permit and during the first six months of their provisional driver’s license.

Sedona, Oro Valley and Tucson have banned any use of a hand-held cellphone while driving. Phoenix, Flagstaff and Fountain Hills prohibit texting while driving.

COTTONWOOD – Wednesday’s public hearing was an opportunity to discuss Ordinance 2018-01, which states that “a person shall not drive a motor vehicle while using a portable communications device to engage in a call unless that device is configured to allow hands-free listening and talking, and is used exclusively in that manner while driving. Texting and typing while operating a motor vehicle are banned.”

In layman’s terms, the ordinance reads that “a person shall not drive a motor vehicle while holding in his or her hand, typing on or otherwise manually operating a portable communications device.”

The definition also states that the vehicle, “any time” it is in the “traveled portion of a public roadway, whether or not the vehicle is in motion.”