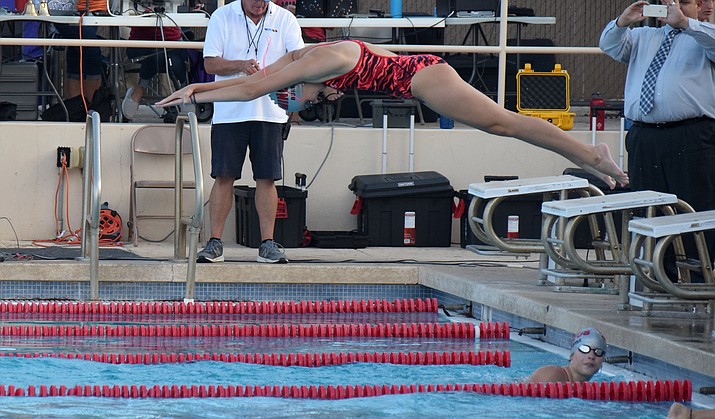 Mingus senior Rylie Burke dives into the pool during a relay. Burke automatically qualified for state in the 50 and 100 freestyles. VVN/James Kelley

Mingus Union swimming and diving shined in their first qualifying meet of the season.

Last weekend at the Wolves Classic in Chandler, the Marauders directly punched their ticket to State in six events and had nine provisional qualifiers.

This year saw the return of automatic qualifying times for Division III.

“Having those back and being able to know right away at your first qualifier that you’ve already got swimmers that have automatic times and swimmers and relays that have provisional times, it’s just, I think for the swimmers, extremely reassuring that what they’re doing is working,” Wesbrock said. “All that hard work, all that practice, all that dedication, that it’s paying off and they’re seeing that early on in the season.”

Division III did have them in the past brought them back this season.

“Oh I think it makes all the difference in the world, I’m so pleased that the AIA made that decision, put that in place this year,” Wesbrock said. “Again, it’s been there in the past, we just haven’t had in our division It’s awesome to see that recognition that ‘oh my gosh, I just did it.’”

“We had some incredible swims,” Wesbrock said. “That qualifier included teams from every division, so you have top teams like Brophy and Mesa Mountain View, who are Division I teams, Xavier, Mountain View on the girls side, there’s others in there. To see our swimmers, Rylie was sixth in the 50 Free, sixth and that’s in a meet that’s got swimmers from all three divisions I think that too is like ‘whoa, those times that are being put up in Division III, they’re no joke, they’re quick, they’re competitive.’”

Mingus Union’s next home meet is Thursday at 4 p.m. at Cottonwood Aquatic Center when Flagstaff and St. Mary’s come to town.