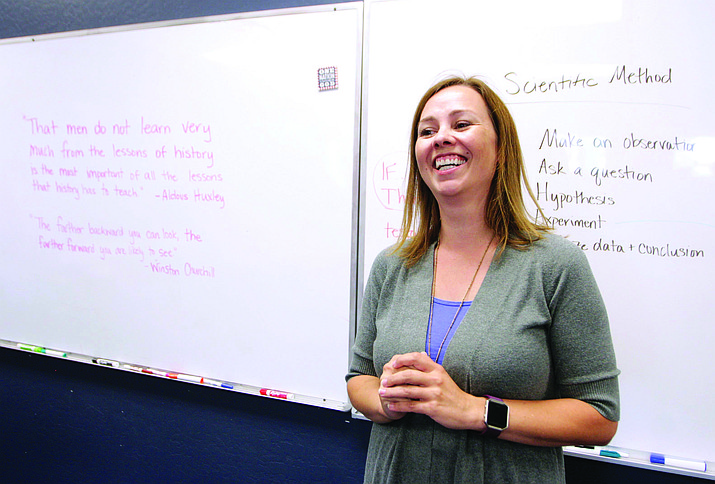 Including the years Kelly Maize has taught photography and painting, the eighth grade teacher at Camp Verde’s American Heritage Academy has been in the classroom for nine years. VVN/Bill Helm

CAMP VERDE – Include the years Kelly Maize has taught photography and painting, she’s been in the classroom for nine years.

Back this year in Camp Verde after a year in Cottonwood, Maize, teaches eighth grade at American Heritage Academy. According to Stephanie Young, the school’s first-year principal, Maize’s strength as an educator is communication.

“Kelly is in constant communication with families,” Young says.

Maize’s “other strength,” Young says, is her ability to connect with students.

“She has built strong relationships with her students not only in her class but also around campus,” Young says. “Kelly makes a difference by being a team player and showing creativity while teaching.

“Having a drama [and] theater background, Kelly is able to bring in different strategies and approaches for teaching and making learning fun.”

For Maize, it’s obvious that the best thing about being a teacher is “working with the kids and watching them overcome challenges.”

“They’re so proud of themselves when they realize how much they’ve grown and learned,” she says.

When did Maize know that she wanted to become an educator?

“About a month after I started. I didn’t originally set out to be a teacher. In fact, both of my college roommates were education majors and I thought they were nuts,” she says. “But God had a bigger plan and I ended up as a long-term sub for a sixth grade class here at AHA.

“I fell in love with the kids and the school. After teaching a couple of years, I moved out of state and had a different job, which affirmed that I felt most fulfilled when teaching.”

The hardest thing about teaching, Maize says, is “navigating all the red tape and politics.”

“It has become very complicated under the banner of improvement,” she says. “But I don’t think it’s always in the best interest of the children.”

“I wouldn’t know how to define my teaching style. I find that if I have high expectations of my students, they will rise to meet them. I just walk in the classroom expecting the best, and refuse to accept anything less.”

“In Arizona, sixth graders learn about ancient world history – Greece, Egypt, Rome and China. I believe I was originally hired because I had traveled to Greece, Italy and Asia, and although I lacked formal education experience, I had real-world experience.

“I believe travel is one of the most important things you can do. As they say, it’s the only thing you can buy that will make you richer. It will certainly help you appreciate this country more.

“I encourage all of my students to travel.”

“I once saw an ad to become a foster-mom for orangutan babies, and that seemed like a pretty sweet gig, but it required moving to Malaysia,” Maize said.