Mingus football debuts at No. 17 in AIA rankings 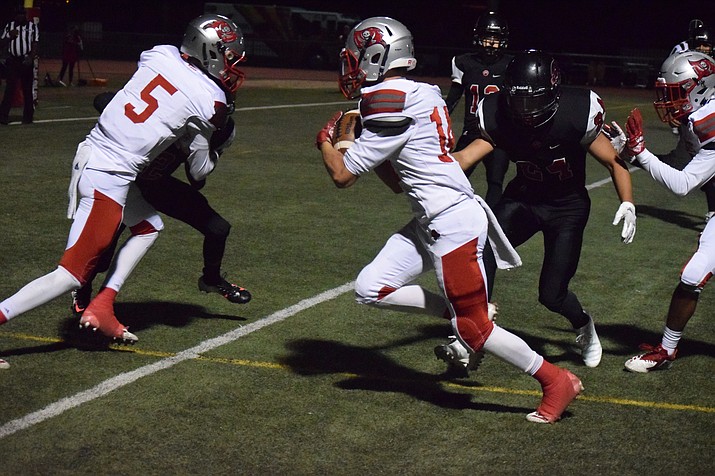 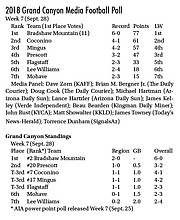 Mingus Union football was barely on the outside looking in in the AIA’s first rankings.

The Marauders (4-2, 1-1 Grand Canyon) debuted at No. 17 in the state’s first power rankings, unveiled on Tuesday. The state tournament is a 16-team affair with eight automatic bids and the eight highest ranked at large teams.

Grand Canyon rivals No. 2 Bradshaw Mountain and No. 7 Coconino were in the top 10. Chandler Seton Catholic Prep at 12th was the other Mingus Union opponent in the top 16 in the first rankings.

Although the Marauders lost 42-40 to Coconino on the road, they host Bradshaw Mountain on Oct. 12 on Senior Night.

Last week Mesquite handed Seton Catholic their first loss of the season 45-14. Prescott likely dropped after losing 35-23 to Oro Valley Canyon del Oro last week in a game that was postponed due to rain.

Tucson Salpointe Catholic (5-0, 0-0 Kino) topped the rankings, with Scottsdale Saguaro (5-1, 2-0 Desert Sky) surprisingly coming in at No. 5. The Sabrecats have not lost to a 4A school since 2012, haven’t lost to a team from Arizona since 2015 and have won five state championships in a row.

Mingus Union moved up to fourth place in the Grand Canyon Region Media Poll and four points behind Coconino, who is in second. The Panthers (4-1, 1-1) suffered their first loss of the season when they fell 28-14 at home to Bradshaw Mountain (6-0, 2-0).

The Bears are off to their first 6-0 start since 1986. They’ve topped the Grand Canyon Region poll every week in its inaugural season and received all 11 first place votes this week.