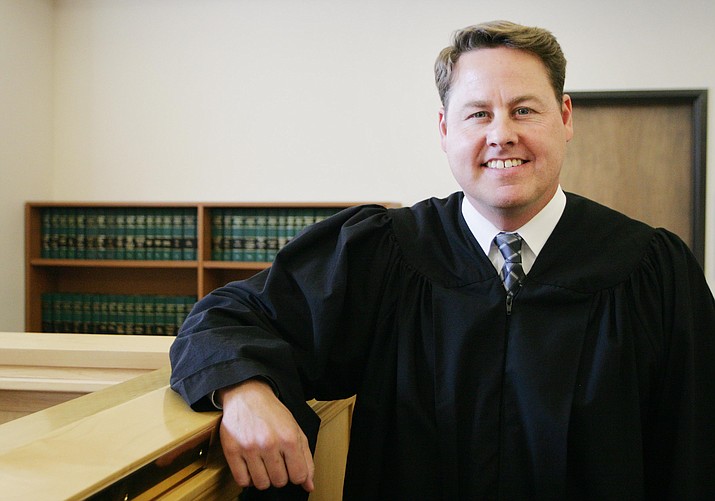 Since 2016, Joel England has been Chief Judge of the Yavapai-Apache Nation’s Tribal Court. VVN/Bill Helm

MIDDLE VERDE – Ask Joel England which parent he favors the most, and he’ll show you his thumbs.

The right thumb, short and stocky, he says is like his father’s.

The left, more slender that it looks longer, is like his mother’s.

Of course there’s more to England than his thumbs.

But England, who works as Chief Judge of the Yavapai-Apache Nation’s Tribal Court, is back home in a way.

After a 21-year military career that began in 1996, England retired and settled back in Arizona, in the Buckeye area, and began to consider his professional options moving forward.

England served as a US Air Force JAG – Judge Advocate General – going back to 2002 after time spent as an intelligence officer.

“I learned that the Yavapai-Apache Nation was looking for a judge,” he says. “So, I applied.”

After two interviews with the Nation’s Tribal Council, “they selected me.”

England and his family grew up in Camp Verde, most anyone in Camp Verde has heard of his father Phil England.

England says he has lunch with his folks “most days.” “They were excited when I got the job,” he says.

Not only is Camp Verde home for Judge England, but so is the Yavapai-Apache Nation.

Growing up, he wanted to be a football player. As he got older, his dream shifted gears, so to speak, and England then wanted to become either a pilot or a lawyer.

“But you don’t go to the Air Force to play football,” England says. “You go because you want to serve your country.”

But football is what he played, year after year as a youngster. First time he went to the Yavapai-Apache Nation’s Middle Verde reservation, he was 10.

“I had teammates out there,” England says. “So my relationship with the Yavapai-Apache Nation started a long time ago.”

Which is why the Nation and the community “is special” to him.

“It’s really an honor, a tremendous privilege,” he says. “They’re trusting me to make important decisions for members of the Yavapai-Apache Nation. “That’s not lost on me.”

Improved security of the courts, staff training and technology are some of the important projects to England as he serves the Nation as Chief Judge.

What also matters to England is that the Nation’s Tribal Council “has supported my efforts.”

“The court is there to help respond to the community, help resolve community issues,” he says. “I really like our wellness court.”

Don Decker, one of the Nation’s elders, has gotten to know England the past couple of years and calls him ‘Judge Joel.’”

“I’ve always called personal friend judges by their first name in this manner out of respect,” says Decker, also the Nation’s Public Relations leader and the editor of the Nation’s monthly newspaper.

“In the many years that I have spent being employed by the Yavapai-Apache Nation, I have seen many judges come and go from our courts for various reasons,” Decker says. “Being a judge on our Nation is having a judge who understands the social systems of the Nation, how people are intertwined in a fabric of relationships with one another and the belief systems of values that is unique to the Nation’s people.”

Decker also says that England “has a good read on the land and its people and mending out verdicts that is done in manner consistent with what the majority of the Yavapai-Apache people would want for those who are brought before the courts.”

According to Jane Russell-Winiecki, chairperson of the Yavapai-Apache Nation’s Tribal Council, Judge England is “one of the best judges we’ve had.”

“Having grown up in the Camp Verde community has helped him to understand our culture and feelings of the people of this Nation,” Russell-Winiecki says. “With that understanding, he is able to provide appropriate rulings that serve justice for the Nation.”