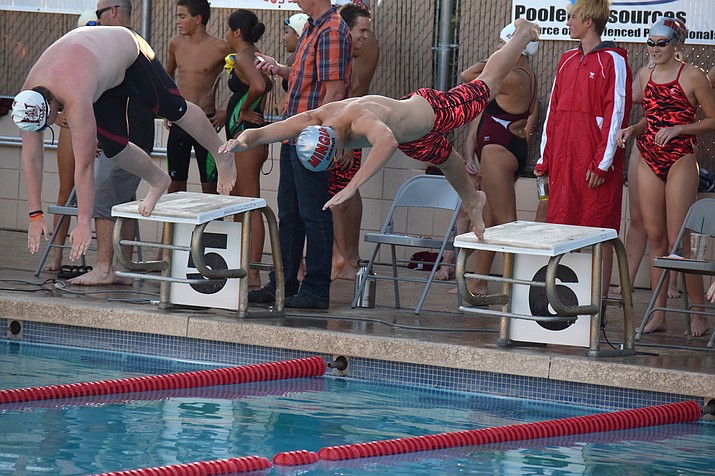 Mingus senior Dallin Gordon dives into the pool at the Marauders’ home meet on Thursday. He earned a spot at the state meet automatically in the 100 Free. VVN/James Kelley

Mingus Union swimming dropped their first dual of the season on Thursday afternoon but they’ve continued their success at qualifying meets.

Last weekend at the Brophy/Xavier Invitational the Marauders qualified swimmers for the state meet for the second week in a row.

Plus Mingus Union held their own against the bigger schools at the meet in Phoenix, like MUHS alum Gunner Tilleman had.

“Again we had some new provisionals, a new automatic in the 50 Free,” Wesbrock said. “It was a great meet. We had points on the board there, which we’ve had points before out of Gunner but we actually were in like 23rd, I think both teams were 22nd, 23rd, boys and girls, so that’s pretty cool when you’re going against the top Division I teams in the state. It’s a fast pool, it’s a fast meet and our swimmers did a phenomenal job, it wasn’t like ‘oh and then there’s Mingus,’ we had really, really just strong swims.”

Senior Dallin Gordon punched his ticket to the state meet with an automatic qualifying time in the 100-meter freestyle. Mingus is in Division III.

Andrew Peterson also had a provisional qualifying time in the 100 Free.

The Marauders also set 18 personal records, led by Brooke Peterson who had PRs in the 100 Breast, the 100 Back and was on the 200 Free relay team that also set a personal record. Burke, Warner and Arwine are the other swimmers on that relay.

In two qualifying meets so far this season, the Marauders have posted automatic times on seven occasions and met the provisional qualifying times on 12 occasions.

“It was a great meet, awesome meet,” Wesbrock said. “We had some time drops and we’re in that kind of crunchy time of the season where we’re not training for dual meets, we are training for State, we are training for those qualifying meets and so the fact that we had kids right around their fastest times tonight was great.”

The Marauders finished first and second in both 50 freestyle events. Gordon was first for the boys, with Andrew Peterson second and for the girls Burke won and Arwine was second place.

Mingus Union won boys and girls 200 freestyle relays and Trezise and Warner both finished first in the 100 Breast.

“Flagstaff’s a big rival for us and we did a phenomenal job,” Wesbrock said. “They brought in divers, we don’t have divers, so right away they first, seconded boys and girls diving from the beginning. St. Mary’s that’s a team that’s in our division but we’ve never had a dual meet with them so it was really nice to have fresh teams, new teams to go up against just to see what’s out there in the state. Then we invited Winslow back, they’re a brand new team.”

All the Marauders’ dual meets are at home this year and they have a variety of teams coming to town.

“It’s really really nice to have that and they love our pool our community can be very, very proud of the facility that we have, it’s a really, really nice facility for high school swimming,” Wesbrock said when asked about the variety of teams at the meet.

The Maruders’ next home meet is Thursday when they host Arete Prep and Bradshaw Mountain at 4 p.m. at Cottonwood Aquatic Center. Their next qualifying meet is the Thunder Invite at ASU in Tempe on Saturday.

“We’ve got this weekend off and then next weekend we do Pitchfork, which is at ASU,” Wesbrock said. “That’s an evening meet, so it’s kinda nice two switch it up and not melt our brains out on the hot pool deck. Then after that is Craig Cummins and State’s around the corner This season has felt really fast, this is the hardest training team that I’ve had, this is my fifth year with the Marauders, and it is by far the hardest working team across the board.”