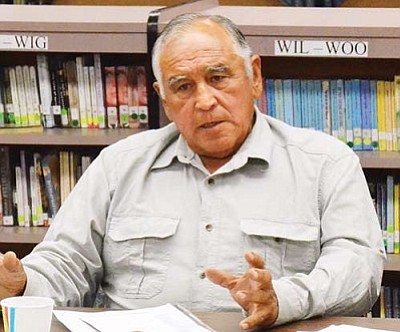 COTTONWOOD – Tuesday, the Mingus Union School Board voted 4-to-0 to accept the Mingus Union/Cottonwood-Oak Creek Consolidation petition checklist as to substance and form as authored by Yavapai County School Superintendent Tim Carter.

According to draft minutes from the Mingus Union School Board’s Sept. 25 meeting, the checklist was approved following nearly 30 minutes in executive session in a teleconference with the district’s counsel “with stipulation that the title may be altered at the discretion of the court, if so desired.”

The purpose of the checklist, which came from Carter, is “to ensure the validation of petitioners,” said Mingus Union School Board member Steve Gesell.

Now, the voters “who decide to sign the petition will have a valid instrument in front of them,” Mingus Union School Board member Anthony Lozano said.

“Because of that, when it gets to the point when voters make a decision at the polls, they’ll have the opportunity to decide whether consolidation is good for the community, but especially for our students. My only concern is that we do what’s best for the students in our community.”

Phil Terbell, a member of the pro-consolidation group Committee for Better Upper Verde Valley Schools, said he believes the consolidation checklist “compares to the procedures [the committee] followed on the previous petition drive.”

Tuesday’s meeting was a special meeting of Mingus Union Hugh School District’s governing board. The district’s regularly-scheduled meetings are typically held at 6 p.m. the second Thursday of each month at the school’s library, located at 1801 E. Fir St. in Cottonwood.