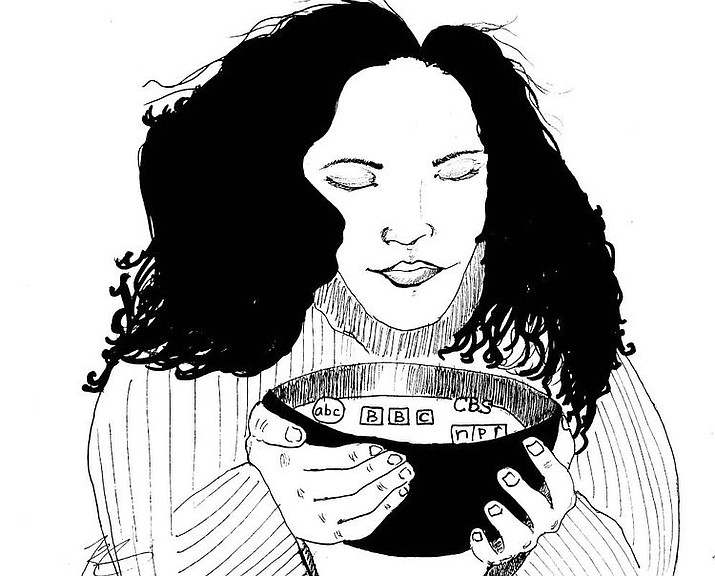 The relationship between the press and public has always been hot and cold. In 1972, the late CBS anchorman Walter Cronkite, armed with a poll calling him the “most trusted man in America,” was considered to be a potential running mate for Democratic candidate, George McGovern. Our current leader’s relationship with the fourth estate has been less than warm and fuzzy.

In a media climate where the term “fake news” has transformed into today’s conspiracy zeitgeist, citizens are completely vindicated in distrusting the journalists. Unlimited information is available at the touch of an app or swipe of a push notification, also opens the door to unlimited misinformation.

Having a certain level of media literacy and critical thinking skills is key to navigating through this churning sea of lies, echo chambers and — dare I mention it again? — “fake news.” Journalists are trained to view every new fact that comes their way with scrutiny. You can, too.

Established journalists generally work on an assigned beat, sometimes for years. This makes them a quasi-expert on the beat they are covering. If you’re interested in following a particular issue, follow the journalist who is covering it. Our own Bill Helm has been covering Verde Valley school districts for three years. Managing Editor Dan Engler has vast knowledge of the region’s history. Dan’s editorials informed a lot of my own reporting when I first started working at the Verde Independent.

On the other side of the coin, a suspicious byline is generally a tell-tale sign of a fake or misleading story. Take, for example, a July 2017 newspunch.com article claiming Amazon sold child sex robots to pedophiles.

“OUTRAGEOUS!” You might say to yourself. But who even wrote this? A simple Google search of the byline, Baxter Dmitry, immediately yields results that reveal he is indeed not a real journalist and is in the business of intentionally posting false stories.

People like Dmitry (if that’s even his real name) have managed to fool quite a bit of people, even academics decorated with multiple degrees. Economist Paul Craig Thomas made the mistake of posting one of Dmitry’s stories on his own personal website.

Remember to always check before you post. This sentiment also rings true for a suspicious website, fact or statistic. Trust your instincts. If something sounds outrageous, it probably is.

Maintain a healthy variety of sources in your news diet

My father has always told me to put lots of colors on my plate; meaning, I should always remember to eat a variety of colorful fruits, vegetables and proteins. Simple enough. I try to apply this philosophy to my daily news diet. It’s unwise to get your news from one source, just as it is unwise to try and get all your nutrients from pizza rolls.

I feel that a large part of my role as a reporter/editor is doing everything I can to make this paper the number one news source in my community. That said, I would never encourage anyone to only get their news from the Verde Independent/Camp Verde Bugle. I would even go so far as to say to read our competitors as well. Keeping up with current events and issues through multiple sources gives you a broad spectrum of ideas and viewpoints that can help in shaping your perspective.

It would behoove all of us as a whole to have a more well-informed public.

Old news isn’t fake… but it can be misleading

A phrase I remember hearing from time to time in every newsroom I’ve worked at is “old news is no news,” which is true. Updated information can make old information obsolete. But with the internet making it so much easier to access old news stories, old news has a tendency to come back from their archived grave and mislead people.

As I’ve mentioned earlier, always check before you post.

Check your own biases, escape the echo chamber

It’s not easy to be suspicious of something you already believe to be true. Say you’re from Arizona, and you believe that since the implementation of Senate Bill 1070 — a law which requires law enforcement to determine the immigration status of someone arrested or detained — crime has dramatically dropped. You may be less inclined to believe that there isn’t really a causative claim to prove SB 1070 is responsible for declining crime rates. So you instead surround yourself with sources and people who share your beliefs.

Avoiding echo chambers, especially online, can be difficult when social networks use opaque algorithms to determine which content you’d like to see on your feed. Sites like Reddit that enlist a rating system can also be dangerous because it allows you to participate in a user experience that coincides with your own political views. It’s important to not automatically dismiss beliefs you personally don’t share. Pulling yourself out of these echo chambers requires discipline and constant vigilance.

Unfriending or blocking someone online just because they have a belief you may be fundamentally disgusted with is counterproductive. Exposing yourself to dissenting views that challenge our own can be a very healthy and may even help in understanding why you believe what you believe.

Just as there are people dedicated to spreading these so-called “alternative facts,” there are also journalists and researchers dedicated to debunking them. FactCheck.org, PolitiFact.com and The Washington Post’s Fact Checker to name a few, are good places to start. For more local fact checks, visit AZ Fact Check on azcentral.com.

If you aren’t sure whether or not the news site you’re visiting is balanced or even truthful, MBFC News, an independent organization dedicated to pointing out media biases, is also good tool.

Commentary: ‘Fake news’ does exist, let the buyer beware
Fake check scams cause big losses for consumers in their 20s
'Just the Facts' on Sedona Fire District bond
Letter: Yes, journalism matters and journalists have obligation to make sure it matters
Tips for clergy dealing with media
Event Calendar