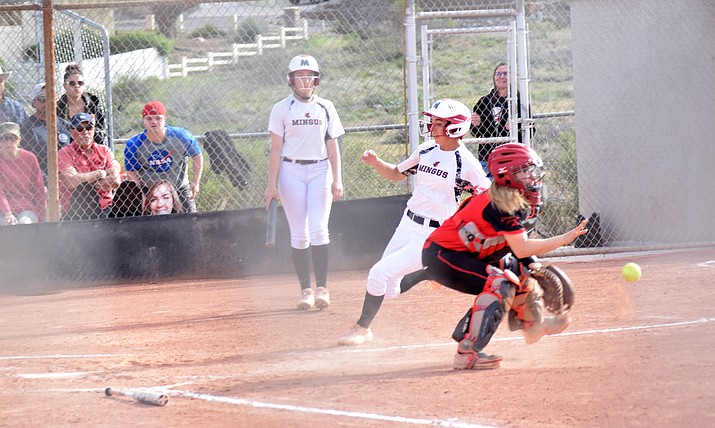 On Tuesday the No. 5 Marauders beat No. 9 Coconino 3-2. Last week they beat then No. 2 Bradshaw Mountain.

“I thought it was a good game, we didn’t have quite the offense we normally have, we were playing a little bit tight but to get a W against that team in this important of a game, that’s a big deal,” Mingus head coach John Brown said. “So I’m happy with the outcome.”

The win kept the Marauders in a tie for first in the Grand Canyon Region with No. 4 Bradshaw Mountain.

“Oh it’s especially important, we really want to win the region this year and to do that we need to beat big teams like Bradshaw and Coco, so it’s good that we executed our goals,” Mingus senior third baseman Lacey Saravo said.

The Coconino win comes after the Marauders lost 11-1 on the road to Bradshaw Mountain a couple days after they defeated the Bears in Cottonwood.

The loss at Bradshaw Mountain was the first power point defeat for the Marauders (16-3-1). They’re 11-1 in regular season games and 6-1 in the region.

“It’s good to see them bounce back and not just lay down,” Brown said. “I mean we were on a roll so sometimes you see an undefeated team kinda falter after their lose their first game but they came back and they won, so that’s a good start we can build off of that.”

Mingus Union took the lead in the second inning on Tuesday with a sacrifice bunt by junior outfielder Dylan Sweeney following a double by Shults.

MUHS added their second run in the fifth inning when Saravo hit an RBI double.

“Lacey had a great game, especially on defense but she hit the ball hard, got a nice double,” Brown said. “Lacey’s one of our leaders, that’s why she’s a captain, so we expect that out of her, but she had a good day.”

“She had a good game, it was one of her first starts as far as batting,” Brown said. “She hit the ball hard every time. She finally got a hit in her third at bat and then to be on base there was a good opportunity for her to score and she got the leading run to win the game, so it was a good day for her.”

Although the Panthers loaded the bases in the second inning, led off the third with a hit and got two runners on in the fifth with one out they were unable to score until the seventh inning when they loaded the bases with no outs.

However, freshman pitcher Alexis Ayersman held on to get the win.

“That was big for her because I think she was getting a little like tensed up, like the bases were loaded ‘what if I let this run go?’ or something like that,” Shults said. “It was really big for her to come back like that but we were there as a team to back her up and help her through that.”

Saravo said a win like that doesn’t exactly cancel out the defeat at BM but it gives them hope for the rest of the season.

“It’s been super special,” Shults said about this season so far. “This group of girls is amazing, we all love each other and we hard together, we work really well together.”

The Marauders travel to No. 17 Flagstaff on Tuesday. Then on Thursday at 3:45 p.m. they host the Eagles.