Should there be a code of conduct for Arizona lawmakers? 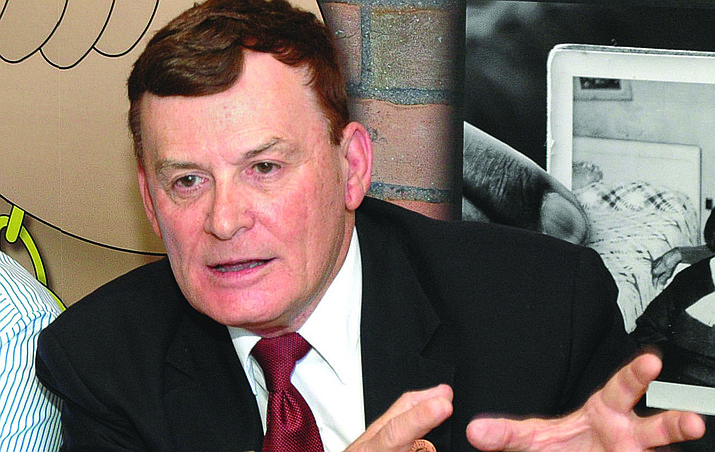 Facing Democrat demands, House Speaker Rusty Bowers on Wednesday finally directed the Ethics Committee to come up with a code of conduct for lawmakers -- including whether they can be ousted for their public comments -- more than a year after it was first promised.

But it took Minority Leader Charlene Fernandez calling out Republican leadership before there was action. GOP leaders had promised last year to create a committee in the wake of the decision by the House to oust Rep. Don Shooter, R-Yuma, over charges of sexual harassment of other lawmakers and colleagues.

It also came after reporters questioned Bowers about the lack of action to date.

What makes the lack of a code crucial, said Fernandez, is there are no clear guidelines for what makes someone unfit to serve in the Legislature. And she said that should include whether it should cover things that occur elsewhere, like the racially charged remarks made by now-gone Rep. David Stringer, R-Prescott to the Republican Men’s Club in Prescott.

But several Democrats already have concluded that such comments should be grounds for discipline -- and even expulsion.

“There is a basis to hold people accountable when you make racist statements along the lines that he made,’’ said Rep. Diego Rodriguez, D-Phoenix.

He is not alone. Rep. Reginald Bolding, D-Laveen, sought to remove Stringer in January based solely on those remarks -- and long before anyone knew about a 1983 arrest in Baltimore on charges of paying two teen boys for sex, one of whom was developmentally disabled.

Stringer resigned on March 27 but continued to insist on Facebook Saturday morning those events never happened.

But Bowers questioned whether speech, by itself, particularly away from the Capitol, should ever put a lawmaker’s right to serve into question.

“He was not thrown out due to racial comments,’’ Bowers said of Stringer.

“He was thrown out for his inability to act in this body because of things that happened long ago,’’ the speaker said, saying Stringer’s actions showed a lack of “ability to have respect for this institution.’’

Rep. T.J. Shope, R-Coolidge, who chairs the Ethics Committee, agreed that it is unlikely that his panel, had it completed its work before Stringer resigned, would have recommended that he be removed for his comments.

The move came shortly after former Senate President Steve Pierce, R-Prescott, was sworn in to replace Stringer who quit suddenly last week in the wake of disclosure of the arrest report. Pierce had been selected earlier in the day by the Yavapai County Board of Supervisors.

That appointment finally allows the House to once again resume floor action: Stringer’s resignation left the GOP with just 30 Republicans in the 60-member chamber, an insufficient margin to pass any bill without Democrat cooperation.

“I know there’s a full agenda today,’’ Pierce said moments after being sworn in by Supreme Court Justice Robert Brutinel who also is from Prescott. Pierce, who left the Legislature after 2014, said he will serve out the balance of Stringer’s term through the end of 2020.

The Yavapai supervisors choose him over Ken Bennett, another former Senate president, and Steven Sensmeier who has been active in Republican politics.

Pierce acknowledged that during his eight years in the Legislature he did not always side with fellow Republicans. That included a controversial vote to expand the state’s Medicaid program at the behest of fellow Republican Gov. Jan Brewer.

“I vote my conscience, I do what’s right for the people of Arizona,’’ he said.

But the fact that Stringer needed to be replaced only underlined the questions that have been looming at the Capitol for more than a year, since Shooter’s ouster, about legislative conduct. Fernandez said that forming the long-promised committee to craft a code would finally decide what is -- and is not -- acceptable from elected officials.

“Where’s the line?’’ Fernandez said. “I think it’s going to be drawn by our fellow colleagues,’’ with input from members of the public.

That still leaves open the question of removing a lawmaker for something said elsewhere.

One of the two charges brought against Stringer -- the other being the Baltimore arrest -- had to do with statements he made last year.

The first set was during that meeting of the Republican Men’s Club where he called immigration, legal and otherwise, an “existential treat to the United States,’’ that American’s “melting pot’’ exists for “people of European descent,’’ and how immigrants from south of the border don’t assimilate because they maintain connections with their home countries..

Despite that he was returned to the Legislature by area voters.

A month later, though, Stringer made comments to Arizona State University students saying that African-Americans “don’t blend in, they always look different.’’

Rodriguez said such comments go beyond a lawmaker’s First Amendment rights. He said what Stringer said “go directly to the legitimacy of other American citizens and their legitimacy and their role in our society.’’

And Rodriguez argued that if Stringer had made those comments on the House floor he would have been found out of order.

“So how is it that he can say that in public and not be held accountable?’’ he said. “That’s part of the issue that we’re talking about.’’

Rep. Mitzi Epstein, D-Tempe, said that, if nothing else, a code of conduct could provide some guidelines and training, including how to work with women and how to “understand that racism is not tolerated in the House of Representatives.’’