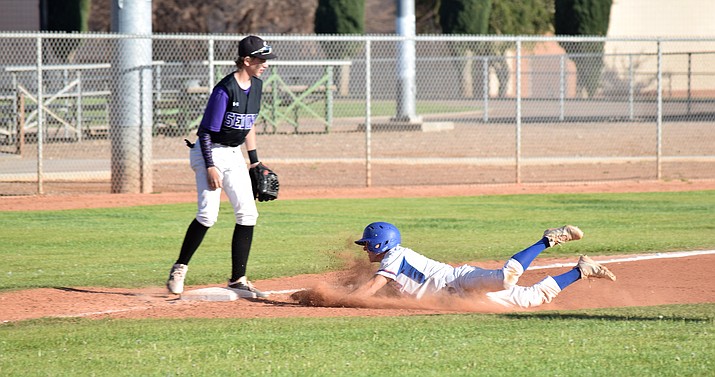 “I felt like we did what we need to do to get the win,” CV head coach Will Davis said. “The strike zone was really small (Friday) so we had to be patient, which we were able to do, we were able to adjust what the game flow was and how the umpire was calling and that was very important.”

The Scorpions (4-6, 2-3) had 13 walks as the Cowboys scored in every one of their at bats. CV jumped ahead 4-0 after two innings and Sedona Red Rock responded with a pair of runs in the third but the Cowboys dropped eight runs in the home half of the third and a couple more in the fourth.

Senior Dakota Battise earned the win, throwing a one hitter, walking seven, striking out seven and giving up two runs in five innings.

“We’ve been playing a lot of games with teams that aren’t real good lately, so we’re not exactly sure other than that Scottsdale Prep game,” Davis said about how they’re playing of late. “They came in No. 3 and we were able to run rule them, so that was amazing but that was one of those days where the other team doesn’t play well and you play the best you have all year kind of scenario. We expect a closer game next time we play.”

The wins by football scores look good on the schedule but can hamper a team eyeing a deep playoff run.

“It’s tough because you really don’t get a lot of good work out of it, so it doesn’t help you prepare for the next day or the next game and we’ve got two more coming up that are teams that these guys beat, so it’s gonna be a long process of staying patient, making sure we’re working in the strike zone, making sure we’re making the plays and staying focused in long innings and stuff and if we can do that then we’ll still continue to improve,” Davis said.

As of press time, the Cowboys, No. 7 Northland Prep and Scottsdale Prep are atop the region standings in the loss column. NPA and CV are tied for first with a 6-1 Central record and SPA is third with a 5-1 mark.

“(The region race is) Northland, Scottsdale Prep and us, we all have one loss,” Davis said. “We lost to Northland, Northland lost to them and they lost to us.”

The Cowboys travel to 1A No. 5 Anthem Prep on Thursday. Their next home game is Friday when No. 30 North Pointe Prep comes to town.