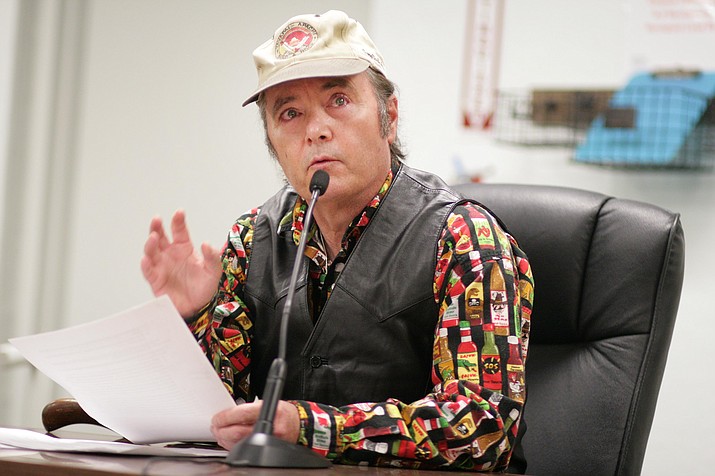 According to Middle Verde resident Eric Eberhard, Yavapai County’s plan to connect SR 260 to Cornville Road would be “déjà vu all over again.” VVN/Bill Helm

Financial concerns – most specifically the belief that a two-lane roadway and bridge across the Verde River to connect Cornville Road and SR 260 between I-17 and SR 89A would bypass motorists away from Camp Verde – led Eberhard’s 20-minute presentation to council.

Compelling council to understand why he is opposed to the proposed connector road, Eberhard complimented council on the town’s General Plan, which voters ratified in 2016.

“Your plan is great. If we stick by that plan, it will be better for everyone,” Eberhard told council. “This [plan for a connector road] is not in favor of the General Plan.”

Eberhard delivered a four-part explanation as to why Save the Middle Verde opposes the proposed connector road. He then summarized his concerns as “déjà vu all over again.”

In 1999, Eberhard was on the Camp Verde council that approved plans by Arizona Department of Transportation to extend SR 260 east from Finnie Flat Road to Main Street.

The result of the bypass, Eberhard told council, is “boarded up buildings, minimal occupancy, a half-empty mall and rental prices half of what they were in 1992.”

“We bypassed our Main Street and Finnie Flat and watched that area slowly die,” Eberhard said. “Historically, any place that is bypassed dies.”

According to Eberhard, Camp Verde has “one area left for commercial.” The 260 corridor.

“There is no need for this road,” Eberhard states. “Only harm and expense. Expense we will have to shoulder with smaller revenue as business and residents flee to other areas.”

On April 17, Verde Disconnect is scheduled to tell council why it opposes the connector road.