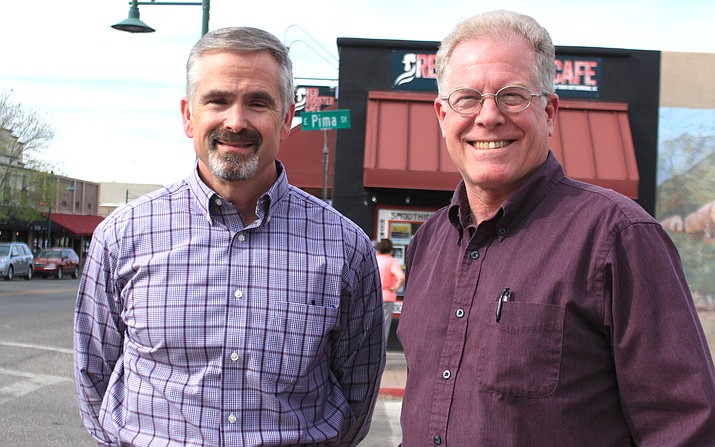 For Corbin, Faust was an easy choice.

“His commitment to the community was the first thing,” Corbin said. “A longtime Cottonwood resident with family here, he has run our parks and rec for years. He knows people in the community, which I think is important because one of our jobs in economic development is supporting current businesses.”

Corbin also said Faust’s background in Parks and Recreation is important because the city’s parks are an economic driver.

“I believe trails and I believe outdoor recreation is going to be key for us going to the next level,” he said. “What is good for Cottonwood, Richard already knows.”

Faust said he was already intrinsically involved with Cottonwood’s economic development in his role as the community services general manager.

“We’ve always been involved with what Casey Rooney was doing,” Faust said.

Corbin said one thing Rooney did well in his role as economic development director was being a good ambassador for the city. Corbin hopes to take what Rooney has already done to a new level.

This means being a “local advocate” for Cottonwood.

“His job will be, ‘what is good for Cottonwood?’” Corbin said. “We’ll still partner and have strong relationships with Camp Verde, Clarkdale and Sedona. Those are all very important in our regional approach to economic development, but I’ve always felt like we really needed to concentrate on Cottonwood.”

The priority will be: “Cottonwood before other things,” Corbin said.

Corbin also said he wants to step up the game for tourism.

“I’m not going to lie, we are a sales tax-based organization,” he said. “We want to do more. We want to have more small events on Main Street and more stuff for kids to do and more Old Town things.”

“That is with Richard helping find the right balance,” he said. And “strategic growth.”

Faust said he wants to take a concentric approach when looking at Cottonwood.

“Business retention is vital for our community,” he said.

Faust said he plans to be more involved with the Business Assistance Center and explore additional opportunities that are out there.

“We want to be able to expand in the context of education, especially with Yavapai College,” he said. “That’s going to be one of the most enduring possibilities.”

Faust hopes to retain a lot of the city’s youth as well.

“If we can keep a lot of our current workforce in, we need to have emphasis on workforce housing,” he said. “Housing is so critical in this area and it’s vital that we try to figure out something we can do as a group of people to try and keep people in this area.”

Faust added that “nobody can afford housing” in the area.

To tackle this issue, Faust has been attending meetings with Yavapai College. They too are facing some of the same issues with affordable housing.

One way to invite more affordable housing developments is to look at zoning, Corbin said.

“You create multifamily, higher density housing,” he said. “You have to kind of be willing to work with them to make it pencil out.”

Corbin, who came to the Verde Valley from Yuma at the beginning of the year, said one of the issues that community faced was with apartments as it was difficult to get them to “pencil out.”

“It’s our job – not to give them tax breaks or anything like that – to find ways to make the project work,” he said.

“So you can put a second dwelling on the property in more places,” he said.

There also needs to be a change in attitude with “Not In My Backyard” thinking, Corbin said.

What the businesses want

Corbin said one thing he’s sensed that local businesses are yearning for, is more help with marketing from the city.

There’s also a perception, Corbin said, that local businesses owners want Cottonwood to be even more open to business. This includes helping more with housing development projects and permit processes.

“They want us to do some of their work for them,” he said. “They want us to make it as easy as possible to open up businesses here in this community or build buildings and homes.”

“Casey did a great job building a brand, ambassadorship for the City of Cottonwood but I just see Richard’s focus of local first, of Cottonwood, that I just think we are going to go to great heights in and do great things.”