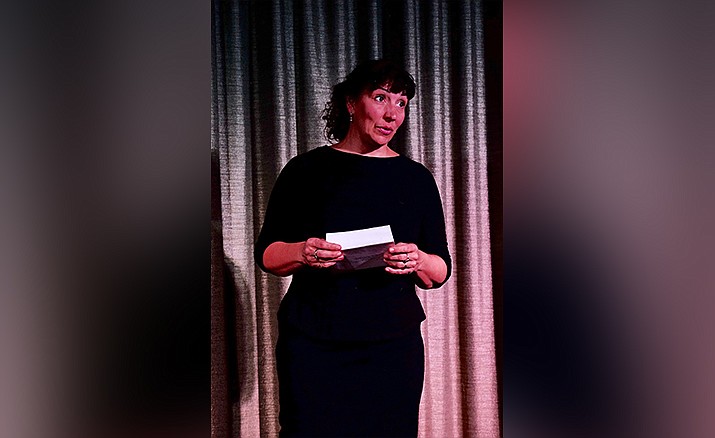 Teri Fiorito Bays performs one-woman play for a one-night only performance of the Joan Chittister Play at the Mary D. Fisher Theatre on Saturday, April 13 at 7 p.m.

Now with images, this performance precedes Bays joining Chittister for The Joan D. Chittister Lecture/Event series in Erie, PA, whose past distinguished guests have included Maria Shriver and Cokie Roberts.

Joan Chittister is an international speaker on subjects of peace and justice.  A co-founder of the Women’s Global Peace Initiative, and a radical Benedictine nun of Erie, Sister Joan has authored 60 books on justice, peace and equality and is a courageous and passionate voice in the Roman Catholic Church.

She has appeared with Oprah on Super Soul Sunday as well as NOW with Bill Moyers.

Teri Fiorito Bays served as Director of Music and Liturgy at St. John Vianney Church in Sedona for 15 years, is the solo artist of two CDs and the author of Through Stained Glass: the priests of my life.

Arizona audiences have seen her lead performances at FLOC and Canyon Moon Theatre.  Bays performed leading roles in musicals and starred in cabaret shows in New York City’s iconic The Duplex and Don’t Tell Mama’s prior to moving to Sedona.

Bays is a singer, writer and actress and her relationship with Sister Joan is revealed in her new play of Joan’s life.

The play is, of course, about Sister Joan Chittister but it is also about all women and their relationships and challenges.

Their lives highlight and contrast the issues of identity, and abuse, spirituality as well as life in the Catholic Church.  Bays weaves these themes like threads in a tapestry so we both relate to the characters while also feeling inspired by Chittister’s words and wisdom.

Scenes with other characters, all portrayed by Bays, as well as published writing, letters and speeches are all used to tell the story.

Chittister has described the play: “The work is seamlessly, artfully and movingly welded together.  It’s a fresh and interesting approach to the notion of the universality of women today.  It has heart and substance ... great praise.”

More information on the play can be found at www.JoanChittisterThePlay.com.

Joan Chittister:  Her story, my story, our story will be performed Saturday, April 13, 7 p.m., at the Mary D. Fisher Theatre.