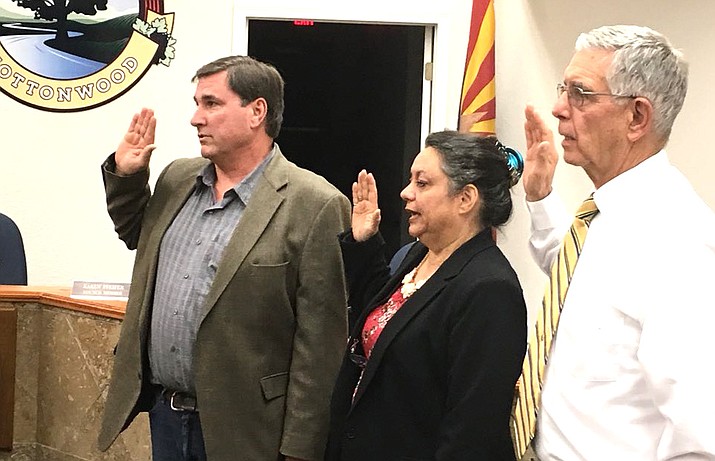 Upon taking office on the Cottonwood City Council, Michael Mathews swore that he would "support the Constitution of the United States and the Constitution and laws of the State of Arizona, and will support the City Code and laws of the City of Cottonwood; that I will bear true faith and allegiance to the same." That should include Arizona's Public Records Law. VVN file photo

Michael Mathews wasted little time coming to his own defense.

When confronted last week about using his personal email account to communicate City of Cottonwood business, the first-term city councilman fired off an email with a statutory reference to boldly proclaim he had not violated Arizona’s Open Meeting Law.

No one has accused him of violating the Open Meeting Law.

It’s a law that is rather easy to understand: “Public records and other matters in the custody of any officer shall be open to inspection by any person at all times during office hours.” (A.R.S. § 39-121).

Just so there is no confusion over what constitutes a public record, the Arizona Supreme Court has ruled, “A public record, strictly speaking, is one made by a public officer in pursuance of a duty, the immediate purpose of which is to disseminate information to the public, or to serve as a memorial of official transactions for public reference.”

Further, the Arizona Ombudsman Office has advised that “… e-mails sent or received by a public official or public employee regarding public business constitute public records regardless of the e-mail account. This includes e-mails sent from or received by personal and other non-government e-mail systems or accounts.”

All of the above are things Mathews is responsible for knowing as an elected official in Arizona. In fact, upon taking office, he was specifically instructed to do his homework on the state’s Public Records Law, according to City Manager Ron Corbin.

“All Council and Commission members are encouraged to attend trainings and review materials on Arizona Public Records Law upon taking office.  Those trainings and materials include a reminder that emails sent or received on private email accounts may be public records subject to disclosure on request; as well as advice to be careful about using private email accounts to conduct city business,” the city manager explained.

Further, Corbin notes this is not just an expectation for elected officials, but, also, all city “employees are directed to use their work email for work-related items.”

There is a core value in having public officials -- especially those who are elected to serve us – not use their personal email to communicate public business. It deals with the principle that you do not conduct the public’s business behind the public’s back.

Last week his private email use concerned the issue of airport noise. Over the weekend, a local resident reported on Facebook she had communicated with Mathews twice via email and found him extremely helpful. Neither the resident nor Mathews will say if those communications are through his private email account. All of which makes you wonder just how often Mathews has used private email to communicate city business.

The right thing for Mathews to do now is provide the city with all city-related emails he has sent from his private account so the city can fulfill its obligation to maintain and store the public records he created.

Further, he needs to alert the community he has made the otherwise private emails public. He needs to assure the community that going forward he will only use city-authorized email to communicate city business.

In other words, he will conduct city business in the manner that is required by law.

That’s the fair and right thing to do. After all, Mathews pledged to uphold the laws of the State of Arizona when he was sworn into office.