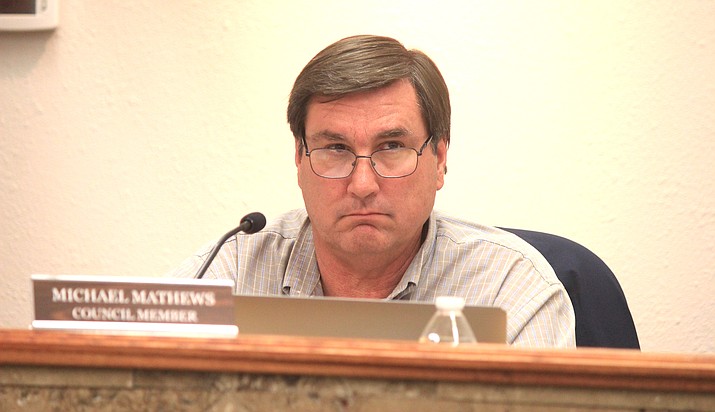 It represents poor leadership on Michael Mathews' part when city employees are required to conduct their business in accordance with the Public Records Law, and he insists a different standard exists for himself. VVN file photo

For the second time in five days, first-term Cottonwood City Councilman Michael Mathews has come to his own defense over the use of private email to communicate city business.

The first time he did it, he fired off an email with a statutory reference claiming he had not violated the state’s Open Meeting Law. Funny thing is, no one had accused him of running afoul of the Open Meeting Law.

Wednesday morning, another email arrived from Mr. Mathews in which he continued to defend his practice of conducting the public’s business behind the public’s back.

This time, Mathews cited an opinion from Arizona Attorney General Mark Brnovich that stated emails that address public business from private email accounts do not meet the standard of being a public record under Arizona law.

It bears emphasis that despite Mr. Brnovich’s legal opinion, the attorney general did emphasize that “nothing herein should be read as encouraging the use of private electronic devices or social media accounts to conduct official activities.”

But here is where Mr. Mathews falls flat on his face. He failed to find out how the AG’s legal opinion held up in a court of law.

Had he done a little research, Mathews would have learned that just five months after Mr. Brnovich issued his legal opinion, the Arizona Court of Appeals made a ruling that ripped the heart out it.

As reported by the Media Law Resource Center in a review of Lunney v. State of Arizona, “In a ruling that rejects the reasoning of an Arizona Attorney General’s Opinion issued five months earlier, the Arizona Court of Appeals ruled on December 7 that public officials cannot evade the Arizona Public Records Law by using their own cellphones for texts, emails and social messages.”

It is further evidenced by the advice of Cottonwood City Manager Ron Corbin: “All Council and Commission members are encouraged to attend trainings and review materials on Arizona Public Records Law upon taking office.  Those trainings and materials include a reminder that emails sent or received on private email accounts may be public records subject to disclosure on request; as well as advice to be careful about using private email accounts to conduct city business.”

Mr. Corbin also advised that all city employees are required to only use official city email for city business.

It cannot be more abundantly clear that Mr. Mathews’ use of private email to communicate city business is inconsistent with what the Arizona Public Records Law requires of elected and non-elected public officials.

It also represents poor leadership on his part when city employees are required to conduct their business in accordance with the Public Records Law, and he insists a different standard exists for himself.

The right thing for Mathews to do is provide the city with all city-related emails he has sent from his private account so the city can fulfill its obligation to maintain and store the public records he created.

He needs to alert the community he has made the otherwise private emails public.

He needs to assure the community that going forward he will only use city-authorized email to communicate city business.

He needs to do the right thing.