No. 5 Mingus Union softball bounces back in windy Flagstaff 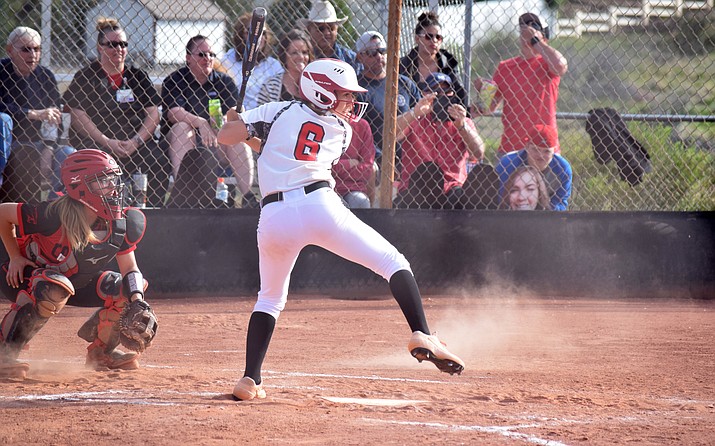 Mingus lost a good battle, final score was 5-6 with Mingus leading most of the game. Coconino had an explosive 6th inning and scored 5 runs off a couple hits and a couple of errors in the outfield. Leaving Mingus down by two runs going into the top of the seventh inning.

Maddie Bejarano was able to hit a Homerun (her 12th on the season and breaking a long standing Mingus High record of 11 in one season), Mingus fell short while leaving 2 runners in scoring position. Dylan Sweeney put a ball in play but was thrown out at first for the third and final out of the game.

“We started to coast a little bit I think, we were winning most of the game and had beaten Coconino on Tuesday and it was hard to get the girls to stay fired up. Coconino is always tough, especially on their home field. But I feel like we let that game slip and it may cost us the region championship.”

“Maddie hitting that homerun solidified her place in Mingus history, that record has been tied and chased for several years, but she broke the record and it is hers alone now. I am very proud of her. She set that goal early on and made it happen. She’s a very driven athlete and I expect she will reset some other records on her way out as a senior here at Mingus!”

Highlights: Chloe Shults pitched 4 innings and gave up only 4 hits and 1 run, she was in line for the win but Alexis Ayersman was not able to hold on and get the save. Alexis suffered the loss of the game. Alexis was however 1-for-1 as a pinch hitter late in the game and had 2 RBI’s with a clutch double in the 4th inning.

Jordyn Cromer was 3-for-3

Maddie Bejarano was only 1-for-4 but she hit a HR that set her name as the new record holder for HRs in a season at Mingus.

Mingus was able to hold on to a strong lead and finish the game winning 13-6 despite 60+ mph winds at Flagstaff. Mingus hit 4 homeruns off of Flagstaff pitcher McKenna Snodgrass, Alexis Ayersman hit a long solo shot in her first at bat, Paige Bartel hit a bomb later in the game and Maddie Bejarano and Jasmine Shults went back to back with homers as well.

Mingus pitcher Chloe Shults went 6 1/3 innings until she ran into trouble in the seventh. She gave up a HR and then hit a batter, so she was relieved by Alexis Ayersman who came in and shut down the rally Flagstaff was trying to accomplish.

“Although the score didn’t show it because of a late rally, I feel like we played well. Our energy was high despite the conditions and it’s always a good rivalry against Flagstaff, they never quit and you have to keep playing regardless if you have a 10 run lead. I was proud of the girls for another Region win and one step closer to our goal of ranking in the top 8 this year going into the state playoffs.”

Mingus plays again Thursday at home against Flagstaff at 3:45pm. This will be a televised game and expected to be a fun atmosphere.

Next Tuesday Mingus will host Lee Williams in a double header at 1 and 3pm, this will be Mingus’ Senior night. Ceremony will follow directly after the second game on the Varsity field.

After that, Mingus will travel to Las Vegas for their annual tournament in Nevada where they face off against some of the best teams in the country to prepare for the State tournament back in Arizona starting the week of April 22nd.