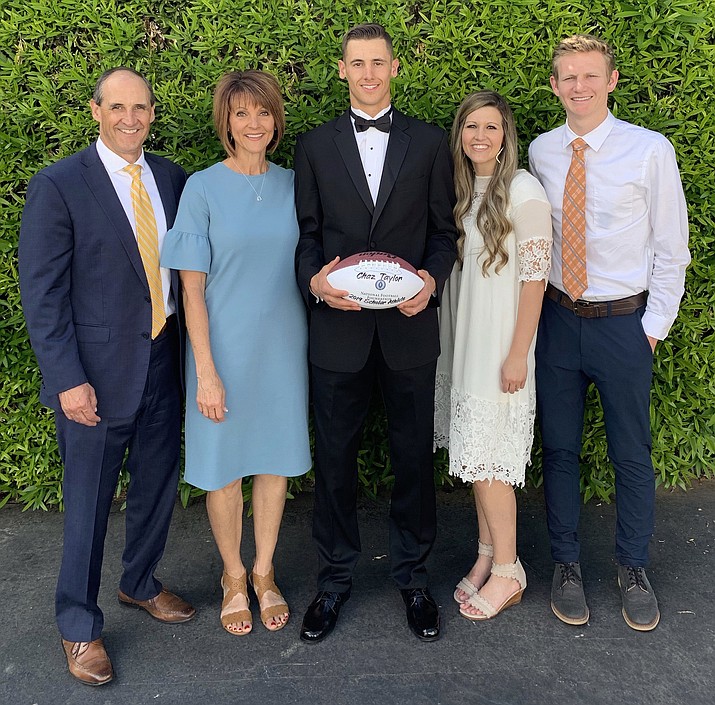 The National Football Foundation Valley of the Sun Chapter and Fiesta Bowl Charities named Taylor to their to first team. The criteria was 40 percent academics, 40 percent football and 20 percent school and community citizenship and participation.

Taylor, who played mostly at wide receiver and safety, also won their 2-Way Player of the Year Award.

“It was awesome, it was just really humbling for me to be able to get that and just know that my hard work on the field and in the school, in the classroom paid off,” Taylor said. “So it was more of a humbling experience for me.”

Taylor follows in the footsteps of his brother C.J., who also was first team in 2009.

In 2019, Taylor was first team 4A All-State as a defensive back, first team All-Grand Canyon on offense and defense and broke the MUHS single season receiving record with 949 yards. Off the field he has a 3.96/4.023 G.P.A., is the vice president of NHS, is an Eagle Scout, was on the Homecoming court, LINK Crew, is a youth and camp counselor and volunteer in the community.

Mingus Union head football coach Robert Oritz gave a speech in his honor at the awards banquet in Scottsdale.

“Honestly it’s been a great honor and privilege on my end being able to watch him grow up, being a part of the community in the past and knowing him since he was born,” Ortiz said. “So that was kinda like icing on the cake for me to see him receive an award. I know I’ve been away from the community for a while, so that to me a testament to his hard work and his family pushing him academically, his work ethic in the classroom and not just in athletics and what he was able to accomplish beyond football or other sports.”

Taylor was also first team All-Grand Canyon in basketball this season. Then after basketball he took up baseball again after two years away from the sport, allowing him to reunite with Marauder head baseball coach Erick Quesada, who coached 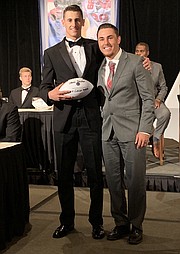 receivers for MUHS on the gridiron.

“Oh it’s amazing and what’s ironic is I’ve known Chaz since he was a kid, me and his sister were good friends going up, so I was always at their house hanging out and it’s really cool to see him group up to the man he is now and actually be his head coach. It’s great, everything as a coach that you want to see,” Quesada said.

The banquet featured a second and third team as well, plus other awards. It was held at the Hilton Scottsdale Resort and Villas.

“It was sweet,” Taylor said. “There was a little reception that we had, then a dinner that we had and they introduced all the athletes who got it and it was really well prepared and it was a great banquet. It was fun.”

Ortiz said Taylor’s younger teammates looked up to him and during his speech that he was excited to see what the future holds for him, that he sky is the limit for him.

“He’s a freak, he was always that guy that brought that intensity,” Quesada said. “He’s a silent leader though, people they try to emulate what he does, especially the younger kids and he goes about everything the right way. You never have to worry about what he does outside of school, I mean he is a true definition of a student-athlete and a gamer.”

Taylor was second in the state in interceptions, fifth in receiving yards, eighth in punt returns, 27th in tackles and 41st in kick off returns. He also punted a few times and spent some time at quarterback.

He said the key to so much athletic and academic success with so many extra curricular activities is being organized and setting goals.

“It’s just staying on track of it,” Taylor said. “I really have to think about ‘okay, what do I need to get accomplished today, like what homework I have to do today’ and I make sure to try to get that done and if I don’t then I try to finish the next day but it’s just staying organized and make sure I get things done.”

He has part of his future planned and will figure out more after his mission.

“I’m going to go to BYU up in Utah for a semester and then go on my mission for two years and then while I’m there just think about if I do want to go on and play sports some where or just go for my education and kinda have that time to figure out what I want to do with college and with sports,” Taylor said.