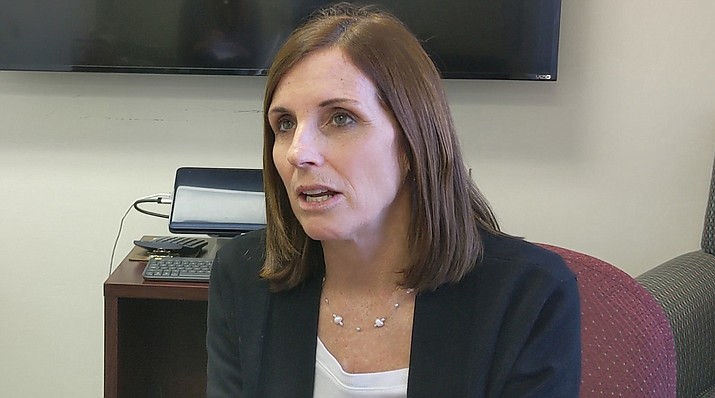 PHOENIX -- An attorney for members of various political parties told a federal judge Friday she should order a statewide election -- and soon -- to let voters fill the Senate seat now occupied by Martha McSally.

Michael Persoon said there was nothing wrong with Gov. Doug Ducey initially appointing Jon Kyl to the vacancy created last year by the death of Sen. John McCain. When Kyl quit in January, Ducey tapped McSally.

But Persoon told Judge Diane Humetewa that Ducey has no right under the U.S. Constitution to have McSally hold that seat until the 2020 general election. He said the governor is required to give voters a chance as soon as possible to decide who should be their senator.

And by that, Persoon said, he means within 100 days of the vacancy.

That date is long past, with McCain dying on Aug. 25. But Persoon said there’s still plenty of time for Humetewa to allow voters to weigh in.

They say if a vacancy in the U.S. Senate occurs within 150 days of the next scheduled election -- as happened here -- then the governor can name someone to hold the spot until the following general election. And that means November 2020.

Persoon did not dispute that’s what state laws say. But he contends they violate constitutional provisions which require that voters get their say as soon as possible.

That’s not the only legal issue Persoon has with the state law.

He also wants Humetewa to void another provision in the statute which says that whoever the governor picks, whether on a shorter or longer-term basis, has to be of the same political party as the senator being replaced.

That’s not just an academic argument.

Persoon told the judge that Barry Hess, one of his clients, would have liked the opportunity to offer his name for the vacancy. Hess is a Libertarian who has run for governor, unsuccessfully, for more than a decade.

Liburdi defended the requirement, saying it ensures some continuity in the political representation of the state in the Senate. But he also suggested to Humetewa that the whole question is sort of silly, saying if Ducey is forced to make a new pick, regardless of political party, he still would choose McSally.

The heart of the legal fight is the 17th Amendment to the U.S. Constitution added in 1913. It took the power to appoint U.S. senators away from state legislatures, as it had been until then, and provided for direct election, the same as has always been true for members of the House of Representatives.

“There’s a radical shift in who that senator represents,’’ Persoon said.

That amendment also says when there are vacancies, the governor “shall issue writes of election to fill such vacancies.’’ But it also says that state lawmakers may allow the governor to “make temporary appointments until the people fill the vacancies by election as the legislature may direct.’’

Liburdi said that last line is what backs the Arizona law saying any vacancy within 150 days of a scheduled election can be put off until the next general election. Anyway, he told the judge, that makes more sense than calling a special election what with the expense and the anticipated low turnout.

Persoon, however, said 27 months -- the time between McCain’s death and the 2020 general election -- is far too long to leave the Senate seat in the hands of a political appointee. He said there’s no reason that Ducey cannot call for a special election sometime this year, giving voters a chance to decide who they want in the interim and not Ducey’s choice of McSally, who actually had lost her own Senate bid last year to Democrat Kyrsten Sinema.

He also brushed aside concerns about cost and turnout, pointing out that such special elections already are required for vacancies in the U.S. House.

That’s exactly what happened after Congressman Trent Franks resigned last year amid an investigation by the House Ethics Committee, setting up an election for his seat the following April. Republican Debbie Lesko defeated Democrat Hiral Tipirneni in that vote.

Lesko had to run again for reelection in November.

Liburdi said that quick turnaround occurred because, unlike the Senate, there is no legal provision for the governor to fill vacancies in the U.S. House, even on a temporary basis. And he rejected Persoon’s argument that having to wait until the 2020 election interferes with the right of Arizonans, including Persoon’s clients, to choose who represents them in the Senate.

It will just have to wait until next year.

Even at that, whoever wins in 2020 -- assuming Humetewa spurns Persoon’s request -- would get to occupy the seat for just two years, until 2022 which was the end of the six-year term to which McCain was reelected in 2016. Then there would be a race for a new six-year term.

Humetewa said she also wants to read legal briefs that will be submitted by Ronald Jacobs, a private attorney hired by McSally in her bid to convince the judge to let her serve through the 2020 election.

No date has been set for a decision.