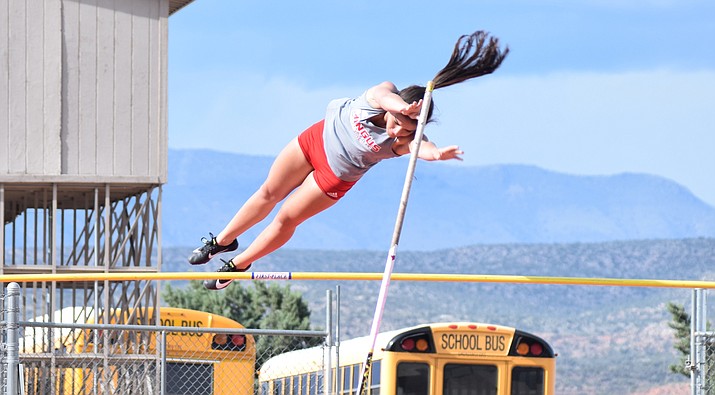 Mingus junior Joelle Santiago competes in the pole vault on Friday at the Mingus Invitational. Santiago won the event and set a PR at 9’. VVN/James Kelley

The Marauders medaled in a handful of events and set PRs across the board in the wind and rain.

“It went really well,” Mingus Head Coach Molly Westcott said. “You know it’s hard when we’re putting on the meet (laughs) to really focus on the kids, I think I only saw a few races (Friday), but so far so good, it was good. Our relay teams, that we’ve been working on the past couple of months did really well.”

The girls 4x400 relay team of Meg Babcock, Natalee Rogers, Cassidy Vergara and Brooke Peterson won. Their time of 4:13.99 puts them back atop the Division III state rankings.

Babcock won the 800 by about 11 seconds. In the girls pole vault, Mingus’ Joelle Santiago won with a PR of 9-feet and freshman Alexandra Carey took second.

Rogers won the 200 meters. Kendrew Streck won the shot put and took second in the discus.

In the girls throwing events, Lindsey Jones took second in the shot put and third in the discus and Summer Scott PRed (86-04) in the dis-cus, taking second.

Dallin Gordon won the 800 meters and Silas Willoughby was second.

The meet featured 14 schools, the biggest Mingus invite ever.

“I think last year we had nine or 10, so it was the biggest and I think it went pretty well,” Westcott said.

MUHS put on the meet with an army of 40-50 volunteers.

“Honestly we could not run the track meet without our volunteers,” Westcott said. “We’ve got a few at every event and they basically run everything.”