Snakes Alive: Rattlesnakes are abundant and not nearly as threatening as many would believe (with video) 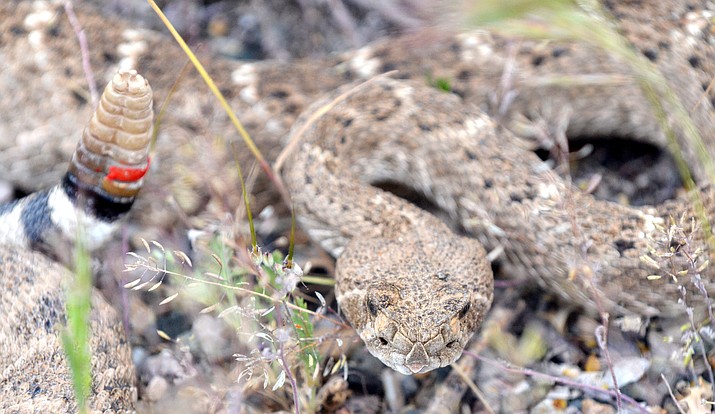 The Western Diamondback Rattlesnake looks back after being released near the entrance of Montezuma Castle on Thursday. VVN/Vyto Starinskas

Some snakes will already have colored rattles and microchips on them from previous captures. If not, a microchip is put in the rattlesnake, a colored pen marks the rattle with a unique pattern and the rattlesnake is released back into the park area. VVN/Vyto Starinskas

The Western Diamondback Rattlesnake leered back at the group of captors who just set him free, shaking his newly colored rattle at them Thursday near the entrance of the Montezuma Castle National Monument.

The young male diamondback was released into the brush after spending a day in the hands of national monument employees and a Northern Arizona University researcher who catalogued, microchipped and marked the 1.2-pound snake.

Each of the 20 or so diamondbacks captured each year at Montezuma Castle receive a unique color marking on their rattle so if they are captured again, they are quickly recognized and can be easily matched to a data base kept by NAU researcher Erika Nowak since 1995.

When a rattlesnake is captured, Kowak said she or a trained NPS volunteer is called in to take data on the snake – weight, length, age, number of black bands on the rattle and look at its overall health.

Some snakes will already have colored rattles and microchips on them from previous captures.

“Tuzigoot actually has the highest density of Western Diamondbacks that’s ever been recorded,” Nowak said. However, there may be places that have not been recorded, she pointed out

The rattlesnakes are kept in buckets by park employees until Nowak or former forest service worker Jim Starkey arrive. Starkey is a trained volunteer and handles many of the rattlesnake calls now, she said.

“We got tongs that kind of look like the head of a rattlesnake,” explained Demii Grant, a visitor use assistant at the Montezuma Castle for the NPS. She was in uniform Wednesday holding the captured rattlesnake for park visitors to observe and touch.

The front half of the captured snake was safely put in a tube as Nowak weighed it, measured it and put a microchip in it. Nowak also used color markers to give the snake a uniquely-colored rattle, and added all the information to her data base of rattlesnakes that she has recorded in her monitoring project at Montezuma and Tuzigoot since the mid-1990s.

Nowak does rattlesnake training with the Montezuma and Tuzigoot employees, Grant said. “We all get trained to work with the rattlesnakes,” she said.

Why Montezuma Castle and Tuzigoot?

Montezuma and Tuzigoot see more snakes because of the location of the two visitor’s centers. The walking trail at Montezuma is right below where the snakes hibernate, she said. Every spring and fall, people see snakes because they are coming from where they hibernate to where they hunt in the summer and they have to cross visitor trails to get out to the area near Beaver Creek.

It’s surrounded by the marsh and river, so it’s an incredibly productive system, she pointed out.

Rattlesnakes use historic structures but also live in modern structures.  “They’re perfectly happy to cohabitate with us. It doesn’t bother them to be around people.”

Moving the rattlesnakes from the area where they hibernate and hunt really disorientates them. “They’ll try to come back. They are often killed by cars,” Nowak said.

Rattlesnakes are not an endangered species in Arizona as they are in some states back East, Nowak said.

Nowak said that there was an incident that occurred before she came to Montezuma 30 years ago when a child stepped on a rattlesnake and had to be treated for the bite.

The only other person bitten in over 40 years by a rattlesnake at Montezuma was working for Nowak, she said. The snake was in a tube and turned around and bit the person.

The park has two kinds of rattlesnakes, mostly the Western Diamondback because of the habitat and the Black Tailed Rattlesnake.

“Just because people and snakes are in close proximity, doesn’t mean people will be bit,” she said,

Hibernation: 'Will we see a rattlesnake?'<br><i>New research changes perspective on elusive reptiles</i>
"Will We See a Rattlesnake?"
Active snakes mean active vigilance
Ready to Strike
Training session offered to teach your dog to avoid rattlesnakes