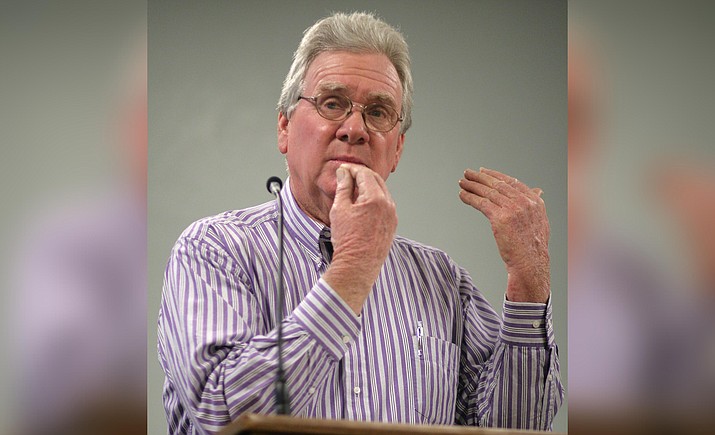 Middle Verde resident Bob Kovacovich likened the Verde Connect project to a piñata, but with “a lot of taxes” instead of candy. VVN/Bill Helm 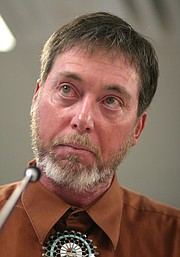 Middle Verde resident Zach Wolfe tells the Camp Verde Town Council that the $25 million grant toward a connector road from SR 260 to Cornville Road is “nothing more than a coupon to encourage reckless spending of even more taxpayer money.” VVN/Bill Helm

A graduate of Camp Verde High School – and a “dropout of Yavapai College” – Wolfe told council why the group known as verdeDISconnect – as well as 300 or so petition signers – oppose Yavapai County’s plan to connect SR 260 to Cornville Road with a two-lane roadway and bridge across the Verde River.

“What I lack in formal education I make up for in common sense,” said Wolfe, who also told council that the $25 million grant the county received for the connector road project “is not free money.”

“This is only Phase I of a bigger project and it isn’t even funded,” Wolfe told council. “It’s nothing more than a coupon to encourage reckless spending of even more taxpayer money. Think of it as 30% off your next unnecessary road project.”

“All the things that Camp Verde’s General Plan identifies with and the foundation upon which we intend to build,” he said. “People working their lands for the greater good of our community. These are not just our homes, but our livelihoods.”

Wolfe told council that the connector road – and any road planning – requires due diligence. The Verde Connect project, he said “isn’t it.”

‘Just a lot of taxes’

“Yavapai County asking for yet another road before completing [SR] 260 makes absolutely no sense,” Wolfe said. “And the Verde Connect makes even less sense. There are better and more cost-effective solutions to manage traffic concerns.”

Wolfe’s presentation emphasized three points: There are better and wiser Verde Valley traffic solutions; Verde’s General Plan for farms and low density housing must be encouraged; and Middle Verde River riparian corridor cultural antiquities and endangered plants and animals should be protected, not degraded or destroyed.

The presentation can be found in council’s April 17 agenda, at the town’s website, cvaz.org.

Known by Wolfe as “a man of few words,” longtime Middle Verde resident and former Camp Verde council member Bob Kovacovich told council that the county’s plan for a connector road “was important enough to get me out of seclusion.”

Likening the project to children striking a piñata, Kovacovich said that “when the blindfold is off, there will be no candy. Just a lot of taxes.”

Council ‘not the enemy’

Though council has no official say-so in the county’s connector road plans, Wolfe said Wednesday that Camp Verde does have “sway.”

“We’re not the enemy,” German said. “You are our friends.”

Though council did not receive public sentiment following the verdeDISconnect presentation, German told the public that it would “get another bite at the apple” when council agendizes discussion on the county’s connector road plans.

“We’ll be setting a future date when we could discuss all the information we’ve received,” German said.

Wednesday’s verdeDISconnect presentation is one of three that council has received since March. On March 20, representatives from Verde Connect presented the project to council.

On April 3, Middle Verde resident and Save the Middle Verde representative Eric Eberhard told council why his group was opposed to the connector road.