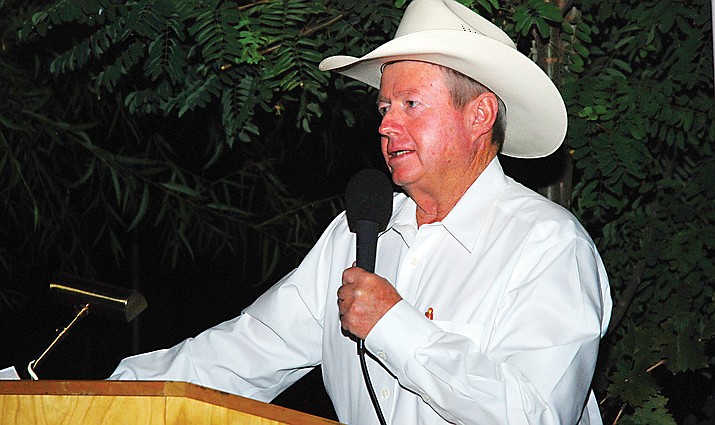 Andy Groseta of the Committee for Better Upper Verde Valley Schools said Tuesday that Ducey’s signature is “just another step in the process to minimize any adverse impact (s) to any school district that will be involved in our consolidation/unification efforts.” File photo

PHOENIX – Monday, Arizona Gov. Doug Ducey put his pen to SB 1073, effectively making law out of what had been known as the consolidation bill.

With Ducey’s signature, the Committee for Better Upper Verde Valley Schools can now look to SB 1073 for direction and clarity as it seeks a merger of the Cottonwood-Oak Creek and Mingus Union school districts.

SB 1073 is two things: a new law which is Arizona Revised Statute 15-397, and an amendment to A.R.S. 15-459. This consolidation bill answers three questions of both supporters and opponents of Upper Verde school district consolidation: the effect of merger on participating school districts (15-397), as well as the canvassing of votes and consolidation financial assistance (15-459).

Andy Groseta of the Committee for Better Upper Verde Valley Schools said Tuesday that Ducey’s signature is “just another step in the process to minimize any adverse impact (s) to any school district that will be involved in our consolidation/unification efforts.”

Regarding the effect on a merger’s participating school districts, the greatest concern going back to 2018 discussions was C-OC and Mingus Union’s partnership with the community’s career and technical education program, Valley Academy of Career and Technology Education.

SB 1073 allows the successor school district “that results from that unification or consolidation” to continue to be a Valley Academy member in the same manner as the former school districts.

Though C-OC and Mingus Union each has separate representation on Valley Academy’s district governing board, the consolidated district would have one member seat on the board.

SB 1073 originally sought a single-canvas vote from the Mingus Union, Cottonwood-Oak Creek and Clarkdale-Jerome districts. It ultimately was determined there would be three separate ballots for the voters in each individual district based on an interpretation of existing state law on school district consolidation found in Arizona Revised Statute 15-459.

Though Clarkdale-Jerome School District is not a part of the merger, many of the school’s graduating eighth graders attend Mingus Union.

According to Clarkdale-Jerome Superintendent Danny Brown, his school justly has a say-so in the consolidation vote.

“Representation and tax implications are examples of potential impacts, and our voters will need to decide, after weighing in on the pros and cons of leaving the union district, how they want the district to move forward in the future,” Brown said.

Brown also said that regardless of the consolidation vote, Clarkdale-Jerome students “will still be able to attend Mingus Union High School in the future.”

Although a draft of SB 1073 stated that $50,000 would be set aside to help offset transition costs of a new unified district, Yavapai County School Superintendent Tim Carter said that the appropriation language was removed at the request of the Senate Appropriations Chair but the amount for transition cost would be included in the budget.

According to the consolidation election checklist, the Committee for Better Upper Verde Valley Schools would need to file signed petitions with Carter’s office by June 3 for consolidation of the Cottonwood-Oak Creek and Mingus Union school districts go to election on Nov. 5.

According to Groseta, his pro-consolidation committee is “working hard” to better understand “the secondary tax rates and revenues if consolidation/unification occurs.”