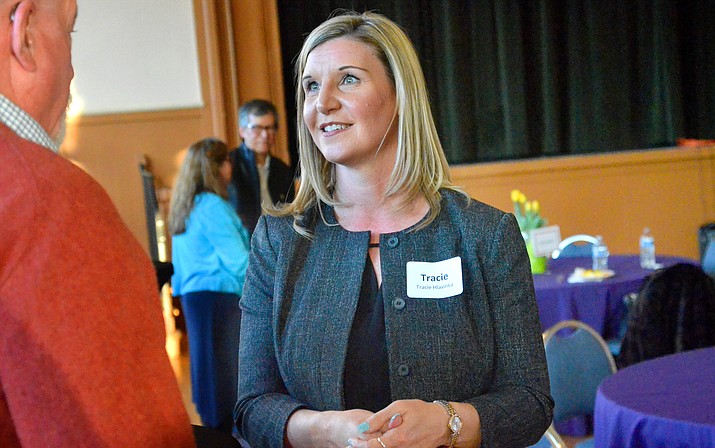 CLARKDALE -- After an extensive three-day interview process, the Clarkdale Town Council has selected Tracie Hlavinka as Clarkdale’s next Town Manager and will be considering her contract at the Tuesday, April 30, 2019 meeting. The Town began a national search for their next Manager in February 2019 following the retirement announcement of Gayle Mabery who has been Town Manager for 21 years.

Mayor Doug Von Gausig stated, “After an exhaustive search that started with more than 70 applicants, the Town of Clarkdale is proud to announce that we have chosen Tracie Hlavinka as our next Town Manager. She comes to us with more than 20 years’ experience in city management and a wealth of skills that will serve Clarkdale well and help us reach into the future with enthusiasm and a strong sense of community. While she was the Deputy Town Manager of DeSoto, Texas, Tracie built strong ties to her community and to the economic drivers in the region - we know that those skills will serve her and Clarkdale well, and feel fortunate to have her join our team. Congratulations to Tracie and to our Town!”

Tracie is currently the Deputy City Manager in DeSoto, Texas and has over 21 years of experience in public administration. She began her career in DeSoto in 1997 as the Community Initiatives Manager and most recently has served as Assistant City Manager. Her responsibilities include the oversight of Municipal Court, Information Technology, Development Services, Environmental Health, and the Action Center, and she serves as a liaison to the Tri-City Regional Jail. She also serves as the City’s liaison to 64 homeowners associations.

Throughout her career, she has modeled the values of community engagement, transparency, continuous improvement, and fiscal accountability. Tracie has assisted DeSoto in improving their bond rating, eliminated a $200,000 deficit in the Energy Management Fund, and increased involvement in DeSoto’s homeowners associations by 300%. She is an advocate for regional cooperation and has an extensive background in economic development, strategic planning, and finance and budget development.

Tracie stated, “I am overjoyed at the opportunity to serve as the new Town Manager for Clarkdale. I feel honored to lead such an impressive staff and look forward to working with residents and neighboring jurisdictions.”

On Tuesday, the Council will have the opportunity to approve Tracie’s employment contract. Her employment with the Town is anticipated to start on June 3, 2019, with a proposed salary of $119,500. Clarkdale’s Town Manager recruitment process was facilitated by The Novak Consulting Group and resulted in over 70 applicants. The Council interviewed the top four finalists on April 17, 18, and 19.

The Town of Clarkdale operates under the council-manager form of government. The Town Council serves as the community’s governing body, providing policy direction through the appointment of a Town Manager. The Manager serves as the chief administrative officer, is responsible for the oversight of the Town’s daily operations, and works collaboratively with staff to implement Council policies and direction.