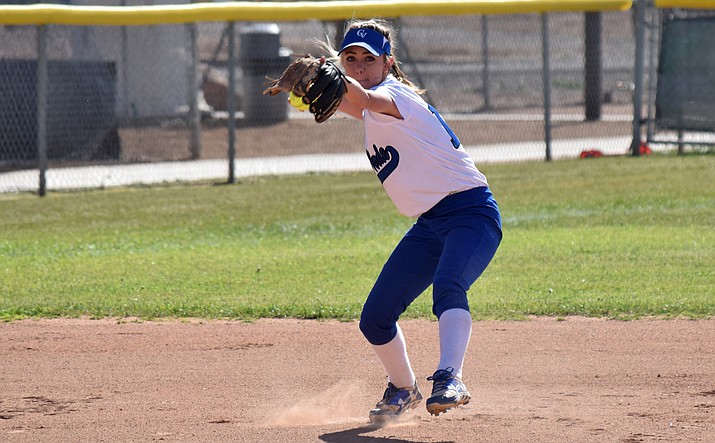 Camp Verde senior Miranda Sharp throws out a runner during the Cowboys’ 23-1 win over Glendale Prep on Thursday at home. VVN/James Kelley

The No. 3 Cowboys beat No. 38 Glendale Prep 23-1 in five innings on Senior Day. CV ends the regular season on a six game win streak in power point games.

“I think we hit really well, we hit as a team,” senior Tyra Smith said. “We just came together and did team hitting, not over swinging and just made contact really well.”

Sophomore Cassandra Casillas started the game in the circle and impressed enough to be a pitching option in the state tournament.

“She pitched amazing, we’re trying to make a plan to go deep into the playoffs and trying to make sure that we have all bases covered and all potential situations covered and so we explored Cassandra and she expressed interest in wanting to pitch, put her in and she did really well,” Henry Smith said. “So it’s good to have a good contingency plan.”

Tyra Smith closed out the game, giving up one unearned run.

“Cassandra did really good, she doesn’t do it a lot either but she’s very consistent with her strikes,” Tyra Smith said.

The Cowboys finished Central Region play 10-0. They clinched the region title outright with a 6-0 home win over Northland Prep.

“They gave us a good game the first time we played in Flag as well, so they’re a good team,” Henry Smith said. “We’re in the process of preparing to compete for state title so the girls that come out and they’re focused right now. It’s staying disciplined and focused and under control and they did that as well during the Northland Prep game.”

The Cowboys have only lost one Central game since the region started in 2017.

“When we start out the season, our goal is to win a state championship and so these steps are special, they’re important and it’s all part of the process, so it’s just knowing that step one is out of the way, you have to win the region, so we’re on to step two now and the final step is to win the thing, so it’s all part of the process and we’ve been here, we know the process, we’re fortunate to have returning players that have been in it for the third time now, so this season is more complete than we’ve had in the past and they’re just prepared to play,” Henry Smith said. “So it’s been a great season.”

“I think we’re playing really well, we’re hitting pretty well and we’re playing as a team and we’re just coming together and doing what he tells us to do and making it work,” Tyra Smith said.

With the state tournament being played in Phoenix, it was the last home game for Camp Verde’s five seniors: Anna Peterson, Rachel Stockseth, Tyra Smith, Miranda Sharp and Carlee Oesterreigh.

Henry Smith said it’s a special class and not just because they have made it to the state title game twice and the final four already. He said they’re very supportive of their younger teammates.

“We had a close family member get ill, Rachel Stockseth was always there getting me to smile, getting me to laugh and of course Tyra and Miranda and Carlee have been a part of my life since — of course Tyra forever — but the other two have been there and just super supportive of the whole team and our whole journey this year,” Henry Smith said. “So a very mature group of seniors that are coming in and graduating. Your goal when seniors graduate is that they’ve learned everything that you can teach and they’ve absorbed everything that you have to offer and it just feels good to see that this group has done that.”