Commentary: The AIA should bring back tennis sectional tournaments 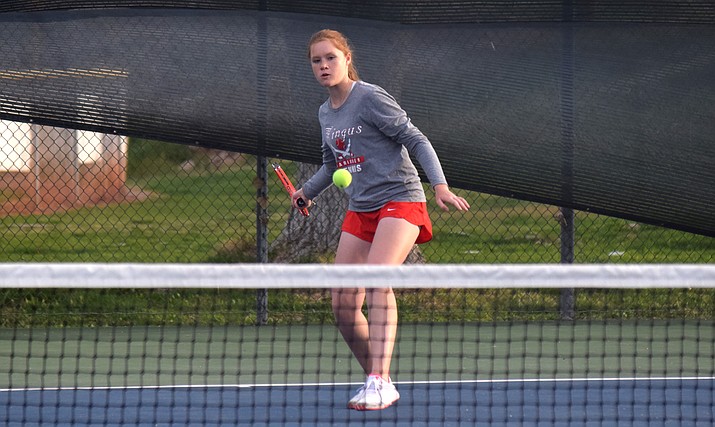 Mingus sophomore Anna Schreiber tracks a forehand ball. Schreiber played in the No. 2 singles slot for the Marauders this year. VVN/James Kelley

Plus in softball they no longer allow the media to take photos from the field and we cannot from the dugout because they consider it to be an “extension of the locker room.” Is there a lot of players taking their pants off during games in full view of everyone?

Anyway those things are weird but not hurting the kids that much. The snow storms were a pain but it’s nice to see some state tournaments in the oft forgotten Yavapai County and they don’t happen every year. The baseball and softball tournaments and track and field meets in the heat of Phoenix are not ideal but the facilities are great and when I covered the track meet a few years ago the weather was in the 70s in Mesa.

The troubling development for spring sports is that the tennis individual tournaments have gone hyper elite.

Previously each team was able to send a singles and doubles team to the state tournaments but this year that has been changed.

Now the top eight ranked teams got a singles player and a doubles team in the state tournament and then the tennis advisory committee picks 16 at large selections to round out the tournament.

What does the team rankings have to do with individuals? Plus the players from the top eight are already in the postseason.

Presumably the committee is there to correct that oversight but how do they watch all the players? This isn’t the college football playoff committee watching the games on TV.

All of the committee members are from the Phoenix or Tucson Areas. The kids in the cities already benefit from getting to play year round.

Page head coach Kori Fitch pointed out in a letter that new system favors USTA players. Although Page has been state runner up recently, they only have six courts and don’t have a USTA presence.

Mingus Union girls head coach Andrea Meyer has proposed an elegant solution: to bring back the sectional tournaments. They were cut because of budget concerns in the wake of the Great Recession

In Division I and II half the team playoff spots are reserved for automatic qualifiers. That’s because they won their section, yet in the individual tournaments the sections are ignored.

The individual tournaments are treated as if they are swimming or track and field, like they have qualifying standards for state but that’s not tennis. Wrestling is a sport with a format closer to tennis than swim or track and they have sectional tournaments.

Some regions even still have basketball tournaments despite playing each other home and away. Those are entirely pointless.

Bringing back sectional tournaments would allow the state tournament slots to be decided on the court.

The AIA has done well to see problems and adapt. In football the state tournaments became a joke so they not only added an open division for the best big schools but also are aligning based on on field performance and not how many kids go to a school.

Bringing back the tennis individual sectional tournaments just makes sense. It shouldn’t be all the expensive, it’s not like they have to cut a bunch of checks for umpires and they don’t need to be at country clubs like the individual state tournaments or the last two rounds of the team tournaments.

Bring tennis back to the people