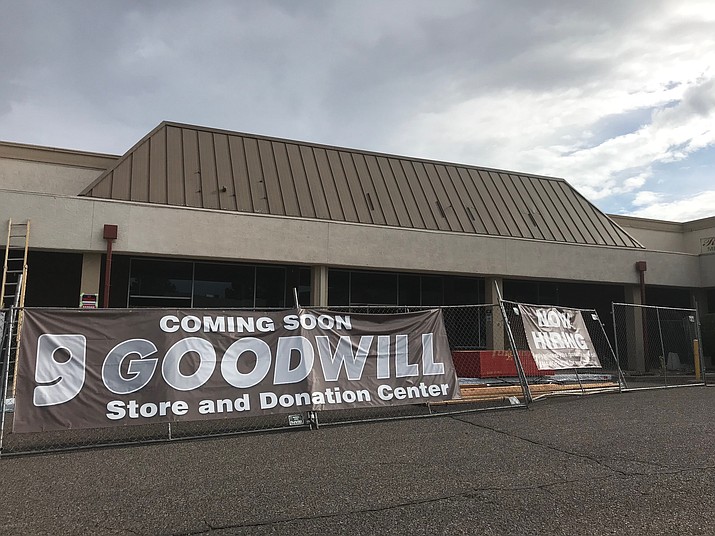 A banner attached to touts the new location of Cottonwood's Goodwill thrift store, and encourages applying for employment via the website. The store will be moving from its location of many years, on Mingus Avenue, to this spot in the Food City shopping center sometime this fall. VVN / Jason W. Brooks

COTTONWOOD — One of Cottonwood’s most high-traffic chain thrift stores is moving.

Not very far, however. Only 1.3 miles to the south.

Goodwill, which has been at its location on Mingus Avenue, near Main Street, for at least 15 years, is moving into an empty suite of the shopping center at West State Road 89A and Main, known to many as the Food City Shopping Center.

Lea Graham, the senior manager of marketing and communications for Goodwill of Central and Northern Arizona, said the move is mainly motivated to take advantage of the vacancy in the Food City center.

“It’s an opportunity to move into a larger space that’s better configured to our brand, and to how we want to serve our clients and customers,” Graham said. “Many aspects, such as signage, are well-suited to Goodwill.”

Graham said the square footage of the Mingus Avenue building is about 6,000 square feet, while the space in the Food City shopping center — in the corner between Sherwood Jewelers and Ralbertos Mexican Food, is 16,000 square feet.

According to its website, Goodwill Industries is a 501(c)(3) nonprofit that provides job training, employment placement services, and other community-based programs for people who have barriers preventing them from otherwise obtaining a job.

The Job Connection element of the Mingus Avenue location was added after a remodel of the facility in the summer of 2012. About that same time, Goodwill set up a donation-only center in the Village of Oak Creek.

Goodwill operates as a network of independent, community-based organizations in South Korea, Venezuela, Brazil, Mexico, Panama, Uruguay, the U.S., Canada, and eight other countries, with 162 local Goodwills in the U.S. and Canada.

Goodwill organizations generate about $4.8 million in revenue, with the majority of funds spent directly on programs.

Goodwill is leasing its Mingus Avenue building and will lease the Food City center space.

Graham said employee positions will not be cut as a result of the move; the organization’s mission includes employment and contributing to the workforce.

“Team members from the current store will move over to the new store, and we’re hiring for a few new openings as well,” Graham said. Anyone interested in applying for full- or part-time positions can visit www.goodwillaz.org to apply.

A Goodwill banner attached to chain-link fencing surrounding an apparent work zone at the new location touts the move and encourages applying for positions via the website.

Graham said Goodwill leaders, both local and in Phoenix, are excited about the move.

“This will be a larger location that’ll provide an enhanced shopping and donating experience,” Graham said.