Airport noise recommendations to be presented to public, Council Aug. 13 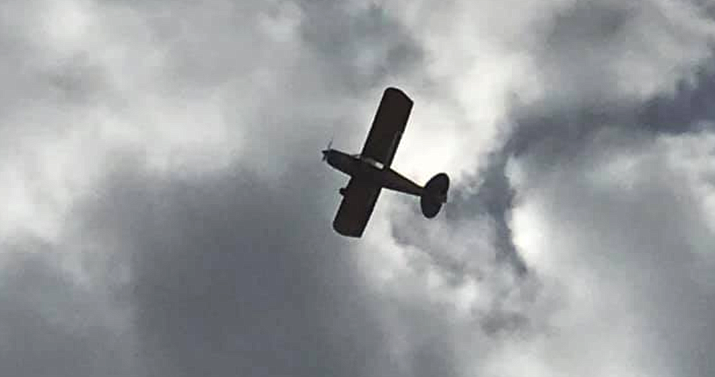 A plane takes off from Cottonwood Airport on a recent weekday. The Airport Commission will present a set of recommendations for noise reductions to the City Council in a public work session, set for Tuesday. Aug. 13, 6 p.m. at the Cottonwood Recreation Center. VVN/Jason W. Brooks

A Cottonwood Council work session that is scheduled for next week will address issues that have cropped up periodically through the years.

"Most aspects of flight and the airport are handled and regulated by the Federal Aviation Administration," Scott told the Verde Independent. "But we've listened to lots of concerns from the public, and we're presenting what we can."

A draft copy on the report has been posted to the city's website: bit.ly/2yC2MmG

A city announcement about the Tuesday, Aug. 13 work session — set for 6 p.m. at the Cottonwood Recreation Center, 150 S. Sixth St. — says solutions "will need to balance the rights of pilots with those of residents ...The action plan will not require the Council to vote, but, rather, provide direction and guidance."

The FAA restricts municipalities from formally regulating aircraft and aircraft noise. There are, however, a few aspects where followed suggestions might reduce the impact of noise on neighborhoods near Cottonwood Airport. The recommendations — which will be a minor part of an FAA grant-funded Airport Master Plan, to be completed in the months ahead — attempts to accomplish a few goals:

• Provide suggestions for pilots who would like to fly in and out of the airport as quietly as possible.

• Limit future development that might be impacted by airport noise.

• Provide education and notices for pilots visiting the area.

Scott said there have been more than 50 complaints called into the city about airport noise since March 2018.

"The big key will be to give pilots some guidance in best practices for our airport," Scott said. "Most pilots from out of town want visitors to their home airports to be respectful, and the ones who live here know how they want anyone to fly over their community."

Here are some of the main points or tactics listed in the recommendations:

• The airport should continue to serve as a training hub for pilots, as is practical for the facility and its location.

• Pilots are encouraged to use Runway 32, which starts at the south end of the airport and runs northward, as the "calm wind" takeoff runway. Planes taking off and flying low over residences has been an issue, at times; taking off to the north gives planes 6,600 feet of space before the first avigation easement begins.

• Post signage alerting pilots who are on the ground about important points of the requests.

• Communicate with incoming pilots about the most important points of the recommendations.

• Consider a recommendation for the master plan that Runway 32 be extended to the south, to enough of a degree as to give northbound aircraft takeoffs more altitude by the time the planes are over residences.

• Feature video and other elements on the airport's website to inform pilots unfamiliar with the area about housing and other important considerations.

• Develop a program to inform realtors, property managers and others of the areas of the city which may be impacted by the airports.

•  Work with pilots and training groups in northern Arizona to develop a non-paved landing field for training purpose — away from residential areas.

Scott said the recommendations will be mostly for ideal flying conditions, which change with the weather and with the seasons.

"The thing I've learned about flying is that every day is different," Scott said. "Flying when it's very warm is not the same as flying in cold winter air. And wind affects everything."