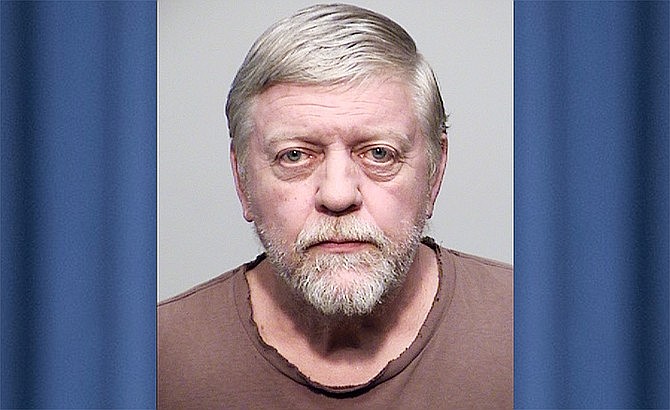 Jon Anderson was arrested Tuesday, July 30, after detectives found at least 15 images of child pornography on his personal laptop computer, according to a YCSO news release.

YCSO detectives worked with investigators from the Internet Crimes Against Children Task Force Program on the case.

Earlier this year, the investigation “developed information that a pornographic image of a child had been downloaded to a computer in the Cordes Lakes area,” according to the YCSO news release. “Computer forensic work indicated the computer was located at a home in the 20000 block of East Antelope Road, Cordes Lakes.”

As a result of the investigation, detectives obtained a search warrant for the home, and the warrant was served at 7 a.m. Tuesday.

Anderson was contacted at the door and allowed detectives inside, the release stated.

Detectives spotted a laptop computer, which Anderson said was used exclusively by him. After detectives explained to Anderson why they were there and that a search of the computer would be conducted, Anderson allegedly admitted to numerous child pornography images on the computer, the release added.

After detectives reviewed the computer’s contents and found at least 15 child pornography images, Anderson was arrested and booked into the Camp Verde Detention Center. He remains in custody on a cash-only bond of $50,000.

“Possession of child pornography is not a victimless crime,” the release states. “Such images portraying the sexual abuse of a child is a form of child exploitation.”

It quotes an excerpt from the Department of Justice Report on Victims of Child Pornography:

“It is important to distinguish child pornography from the more conventional understanding of the term pornography. Child pornography is a form of child sexual exploitation, and each image graphically memorializes the sexual abuse of that child. Each child involved in the production of an image is a victim of sexual abuse.

“While some child sexual abuse images depict children in great distress and the sexual abuse is self-evident, other images may depict children that appear complacent. However, just because a child appears complacent does not mean that sexual abuse did not occur. In most child pornography cases, the abuse is not a one-time event, but rather ongoing victimization that progresses over months or years. It is common for producers of child pornography to groom victims, or cultivate a relationship with a child and gradually sexualize the contact over time. The grooming process fosters a false sense of trust and authority over a child in order to desensitize or break down a child´s resistance to sexual abuse. Therefore, even if a child appears complacent in a particular image, it is important to remember that the abuse may have started years before that image was created.

“Furthermore, victims of child pornography suffer not just from the sexual abuse inflicted upon them to produce child pornography, but also from knowing that their images can be traded and viewed by others worldwide. Once an image is on the internet, it is irretrievable and can continue to circulate forever. The permanent record of a child´s sexual abuse can alter his or her life forever. Many victims of child pornography suffer from feelings of helplessness, fear, humiliation and lack of control, given that their images are available for others to view in perpetuity.