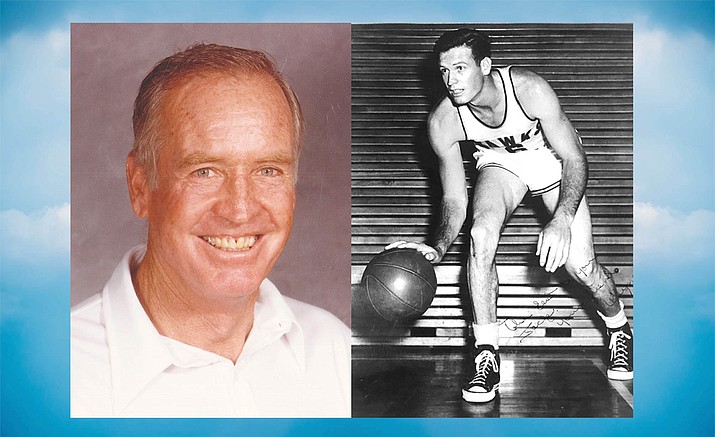 He was 95 years old. Wayne was the youngest of four sons born to Henry (Hank) and Ida Belle (Casner) See.

He grew up in Camp Verde attending school and playing sports. He graduated from Camp Verde High School in May 1941.

After graduation, Wayne attended Arizona State Teachers College (now Northern Arizona University) in Flagstaff. After his freshman year he left college to support the war and worked as a brick mason assistant, a blacksmith assistant and in the copper mines before joining the Marines in Feb. 1944.

He served as an anti-aircraft machine gun crewman and orderly for the captain on the USS Massachusetts in the South Pacific. He was honorably discharged on Nov. 29,1945.

Wayne returned to college following the war after former basketball teammates drove through a snowstorm and insisted he return with them to Flagstaff.

He played for the Lumberjacks’ football team for one year, but basketball was where he excelled. Wayne was recognized three times as the most valuable player of the Border Conference and was selected to the All-American team at Kansas City during the 1946-47 N.A.I.B. Tournament.

He graduated from college in May 1949 with a B.S. in education and later earned his master’s degree. Wayne became the first basketball player from Arizona to play in the NBA.

He played during the 1949-50 and 1950-51 seasons for the Waterloo Iowa Hawks. During those seasons he played against the Minneapolis Lakers, the Boston Celtics and realized a boyhood dream when he played in Madison Square Garden in New York. His rookie year the team manager said he was “one of the most promising rookies in the entire professional basketball field.”

He was also voted the team’s most popular player by the Waterloo fans. Wayne left professional basketball due to a bad knee and the uncertainty of the league’s future at that time.

Wayne married Edna Priscilla Mulnix on Nov. 1, 1949, in Waterloo, Iowa. They were blessed with two daughters, Sandra Lea and Vicki Sue. Wayne loved his family and was very devoted to them.

After leaving the NBA Wayne returned to Arizona working in construction and helping run the Rose Tree Pool Hall in Flagstaff. In 1956 he began teaching and coaching at his alma mater, Camp Verde High School. He coached football, track and baseball early in his career, later focusing on basketball until he retired from coaching boys basketball in 1977.

During that time he led the Cowboys to 11 Class C small school state playoffs in 12 years, finishing runner up in 1967 and 1968. Although he retired from coaching high school basketball, he continued coaching local youth basketball, softball and in the local Babe Ruth baseball league. Wayne retired in 1983 after 28 years of teaching.

In September 1987, he was inducted into the NAU Sports Hall of Fame. Wayne loved the outdoors and was passionate about hunting, fishing, golfing and gardening. At the age of 92 he shot and killed an elk with his crossbow.