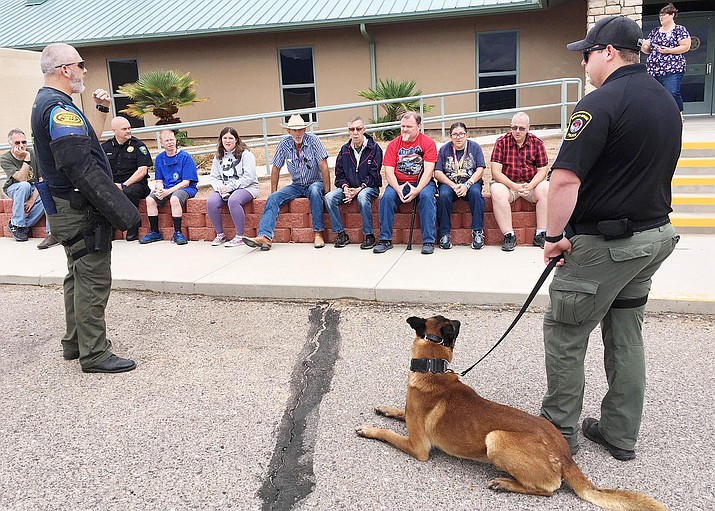 Yavapai-Apache Police Officer Joshua Collins, and K-9 officer Loki, do a demonstration for ranchers from Rainbow Acres during a tour of the Camp Verde Marshal’s Office. VVN/Bill Helm

According to Marshal Corey Rowley, Rainbow Acres asked to bring some of its residents, known as ranchers, to the Marshal’s Office for a tour.

“They had ranchers interested in visiting a police department,” Rowley said.

The tour was interactive, Rowley said, as the ranchers saw a demonstration by CVMO K-9 handler and trainer Dep. Jeff Bowers, Yavapai-Apache Police Officer Joshua Collins, and their dogs, Claymore and Loki, respectively.

Ranchers sat in Marshal’s patrol vehicle and learned about the lights and sirens. Ranchers also met dispatchers, investigators, sergeants and deputies, as well as evidence technicians.

Each rancher received a Marshal’s Office water bottle, stickers and pencils, and ate pizza for lunch.

“We were extremely pleased to have them tour our facility and share our profession with them,” Rowley said. “We are already in the planning stages for more ranchers to visit.”