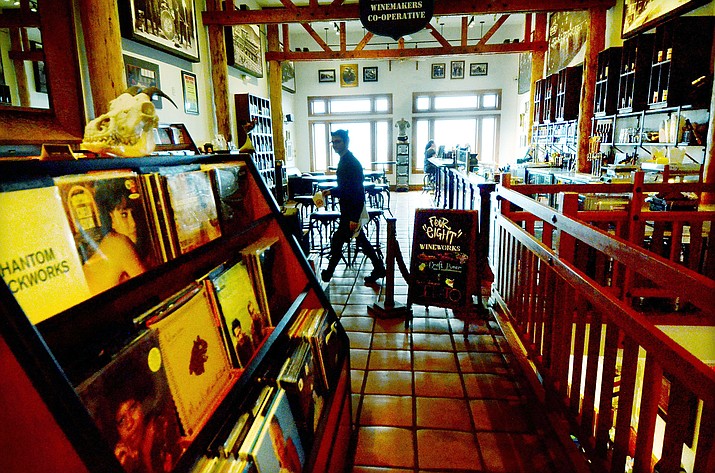 The inside of Puscifer the Store and the Four-Eight Wineworks in Jerome is where Aug. 29 listening parties will be for the new Tool album, which will be released the following day. VVN/Vyto Starinskas

Never underestimate the power of Tool.

OK, so no member of the world-famous band are supposed to be present at the new Tool Album Release parties in Jerome. Tool frontman Maynard Keenan’s Puscifer The Store will be the site of a release parties Thursday, Aug. 29.

One listening party will be from 1 to 3 p.m. and the other 4 to 6 p.m., but you can’t reserve a seat; seating will be first-come, first-serve.

“We have people flying in from Guatemala, Australia, Germany. That’s why we added a second one,” explained Jennifer Keenan, Maynard’s wife, on Monday.

The first Tool studio album to be released in more than a decade, “Fear Inoculum,” will be available to the public Friday, Aug. 30.

Jennifer Keenan, who lives in Jerome with Maynard, said no pre-order of the CD will be available.

“We’re going to play the album before the release,” Jennifer Keenan said, referring to Thursday, Aug. 29.

At the listening party, fans will be able to reserve a CD to be picked up the next day. Maynard Keenan opened Puscifer The Store in Jerome, which is named after one of his three bands, and his wife, Jennifer, is a manager there and is making plans for the “listening party.”

The store, which now also contains Keenan’s Four Eight Wine Works tasting room, has an occupancy of 82 for the listening party, so Keenan said she added a second party on that day.

The Merkin Pizza Truck will be there, and there will be prizes and giveaways, Keenan said. There will be specific items that you would not find normally, she said.

Puscifer The Store has been recently brought unique performers to Jerome.

It scored a coup when Okily Dokilly performed there in March. That was just before the Arizona heavy metal band, which dresses in sweaters and suburban clothes, went on a national tour, and was featured in Rolling Stone magazine.

An Okily Dokilly video has been featured on The Simpsons.

On Aug. 18, from 4 p.m. to 6 p.m., Puscifer the Store and Four-Eight Wineworks will present Martin Atkins for a “special storytelling performance.” The poster lists him as “the founder of Pigface and former drummer of Public Image Ltd, Killing Joke and other influential post-punk and alternative rock bands.”

Besides Tool and Puscifer, Maynard’s third band is A Perfect Circle. Tool, the band that launched Maynard into stardom, plays in large arenas.

Jennifer Keenan said the members of the band would not be at the listening party and her husband Maynard would probably be making wine that day.